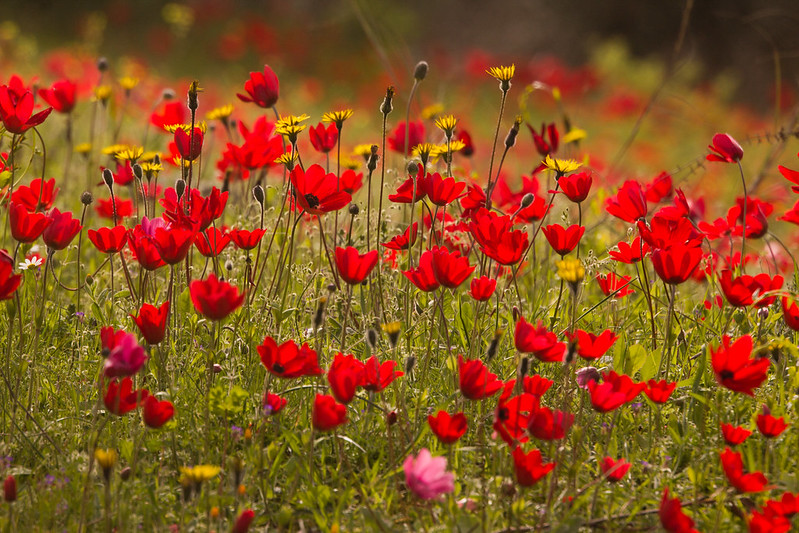 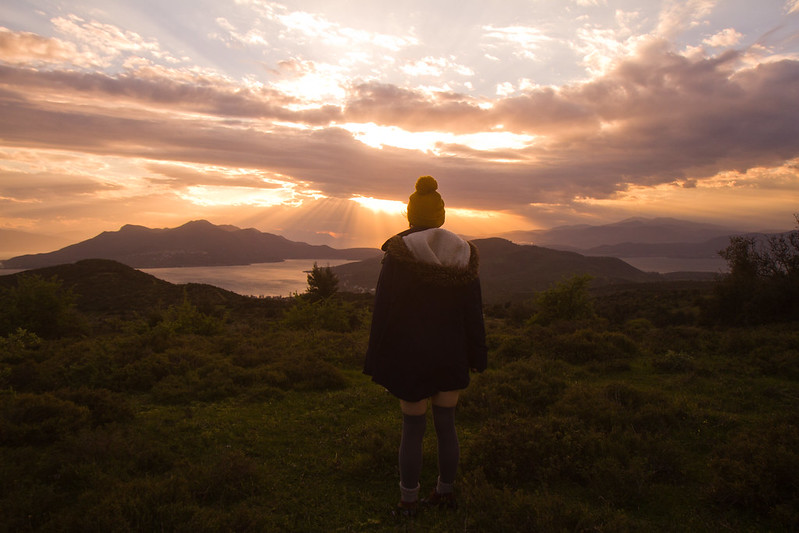 Syrup soaked sticky almond pastries, thermal hot springs glowing neon colours in the night, tiny car ferries crossing aquamarine stretches of gentle, glassy water, twisting mountain dirt roads, and tumbling, bouncing, baby goats. Springtime was alive and in full force on the island of Euboea, in eastern Greece. The hills that surround the sleepy coastal town of Edipsos were covered in a carpet of deep red poppies, daisies, and little lilac flowers, with near-transparent petals, that I don’t know the name of. Mike and I had just dashed from the port of Igoumenitsa, in western Greece, after catching a nightmare-ish overnight ferry from Italy, a couple of days previously, and had finally made it to our intended destination – Free & Real, where we were watching, and participating in, the construction of a geodesic dome, and learning the greek names of all the wild herbs stacked on top of each other in mason jars, and lining the walls of the communal kitchen. Each of the herbs had been foraged locally – the hills and the forests of Euboea are diverse, and abundant – it’s a near dreamlike place for a community, and in fact anyone, to find themselves. 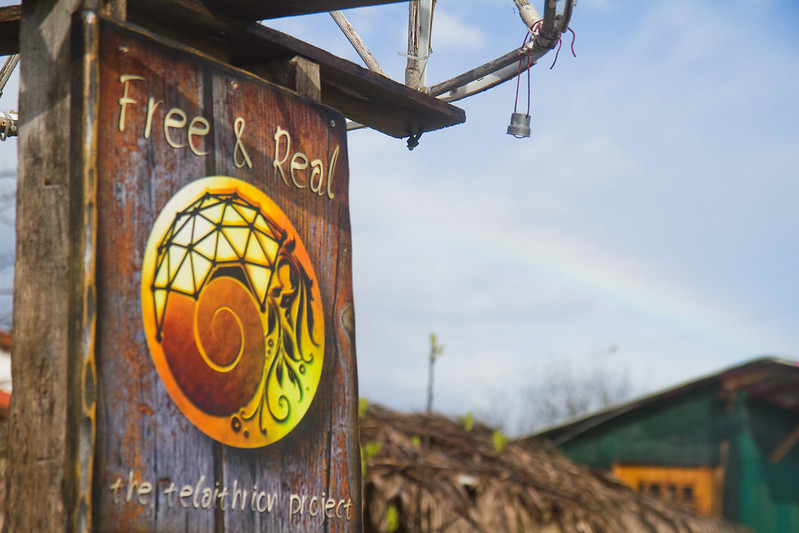 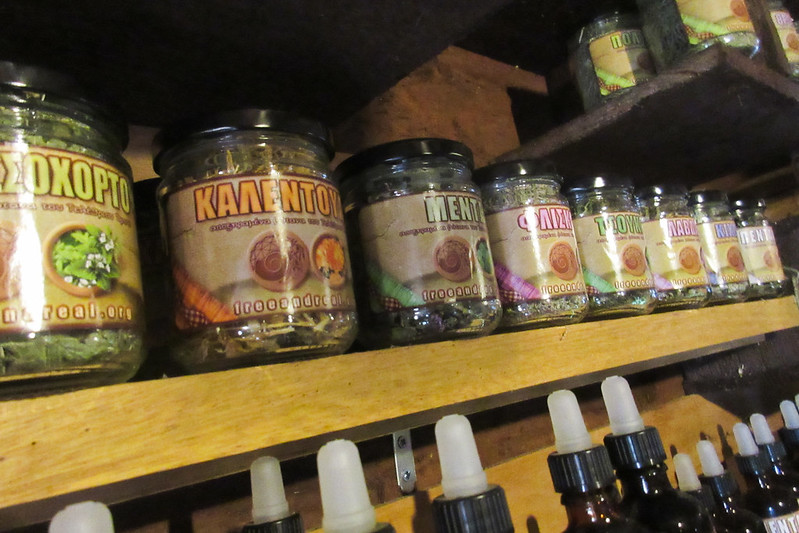 Free & Real, formed in 2009, is a growing eco-community, with a fluctuating membership of visitors and volunteers, and a headquarters in Euboea. Free & Real are focused on the research, and creation and implementation of, an efficient and withstanding social model, based around the principles of self-sufficiency and sustainability, particularly with relation to health, farming, nutrition, building, and energy. Free & Real are currently at the beginning of their journey as a community, and hope to create and develop sustainable solutions to the world’s societal, spiritual, and financial, issues; solutions that can be expanded into, and applied in, the outside environment. In summary, Free & Real stands for Freedom of Resources for Everyone, Everywhere, and Respect, Equality, Awareness, and Learning. 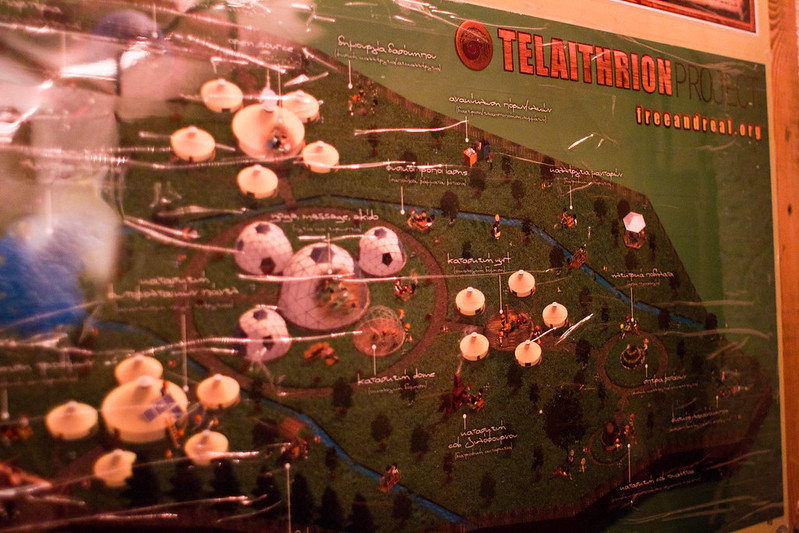 The Telaithrion Project is Free & Real’s vision for a better future. Perched upon the top of a mountain, on the island of Euboea, and reachable only by a dirt road, a piece of land looks out at the islands and towns below. It’s a magical and overwhelming view. This piece of land is owned by Free and Real, and is known as the Telaithrion Project. The hope is that eventually this land will be transformed into a community space, with a number of homes, collective spaces, and gardens, for a group of people to live in a sustainable manner. Currently, there is just the one dome on this piece of land, and this dome was the reason we were visiting the community. The dome was being re-built, after a harsh, and windy, winter. 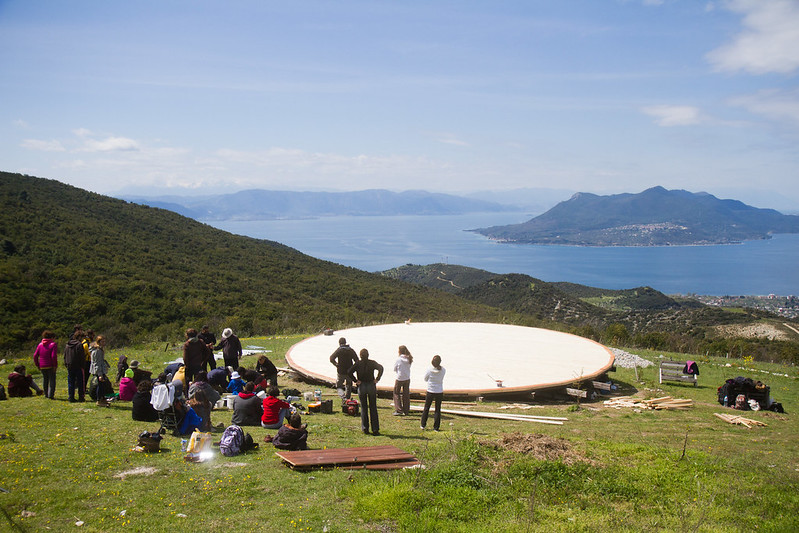 Together with a group of perhaps 30 people, the dome was to be built up again, from scratch. The process would begin by the connecting of a number of specifically designed aluminium pipes, that would be assembled, layer by layer. Holes had been drilled through the pipes at precise locations, and steel bolts would connect the layers of triangles, to form the dome. Geodesic domes are spherical structures that if constructed correctly, are extremely strong, stable, and inexpensive. 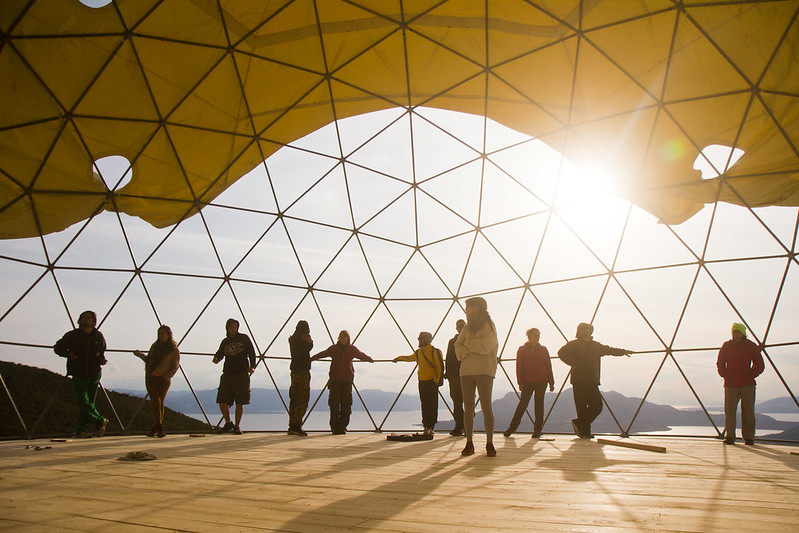 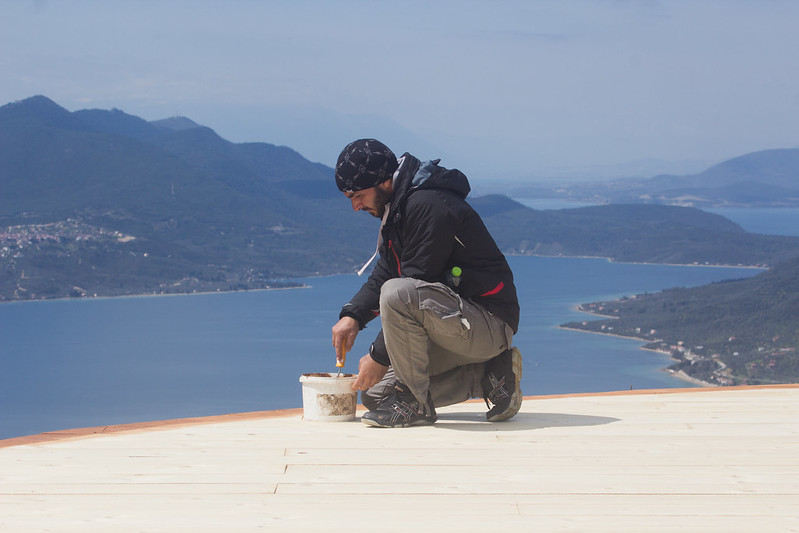 The process of building the dome took approximately a day and a half. When a group of people is building a dome, you start with the top panel, and work your way down. What begins as a two person task quickly transforms into a 20 person task. Eventually, when all of the metal poles are connected, a tarp is laid out over the structure, and then tied down. 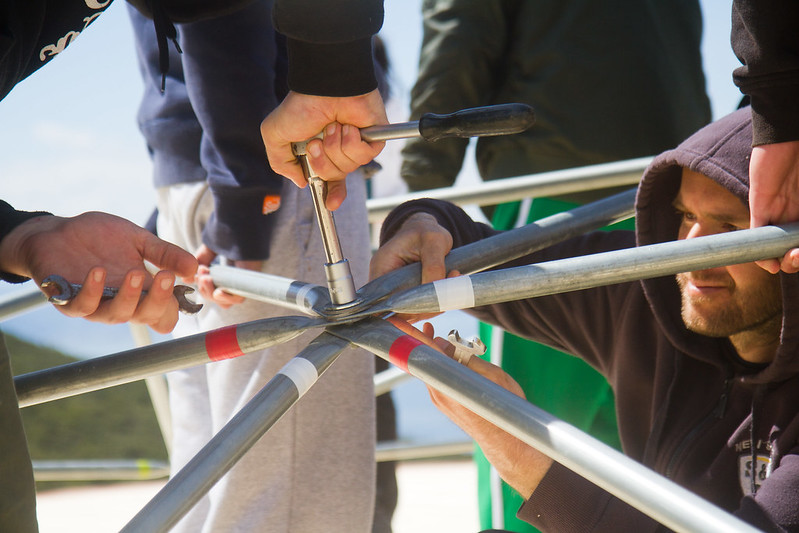 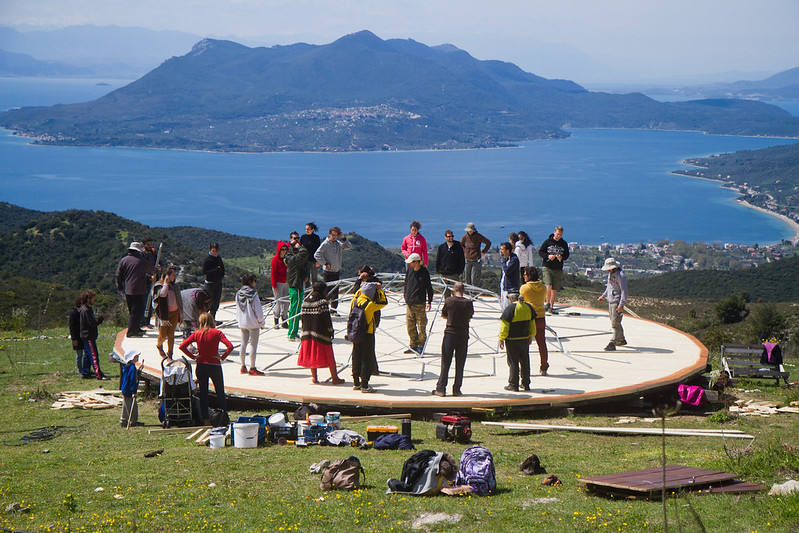 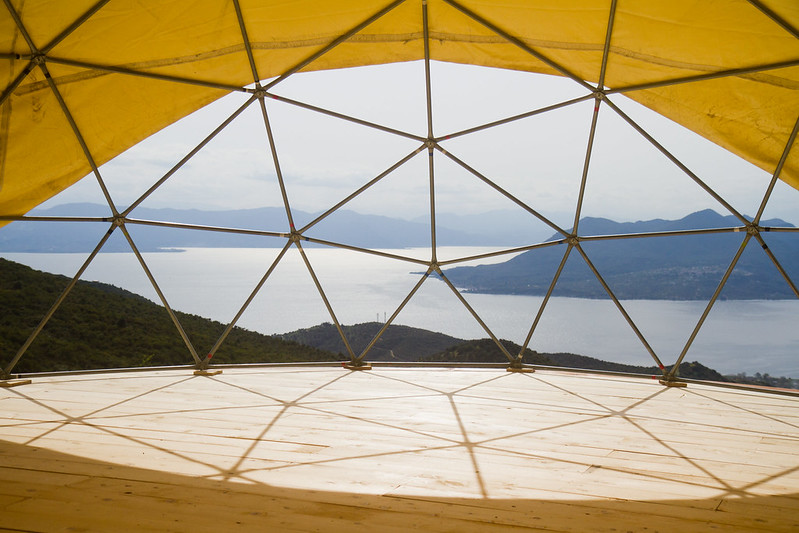 After a day’s work in the bright sunshine, the group of us would return to the Free & Real headquarters, which was located in the small, traditionally greek town of Edipsos, where we would eat vegetarian, communal, meals. 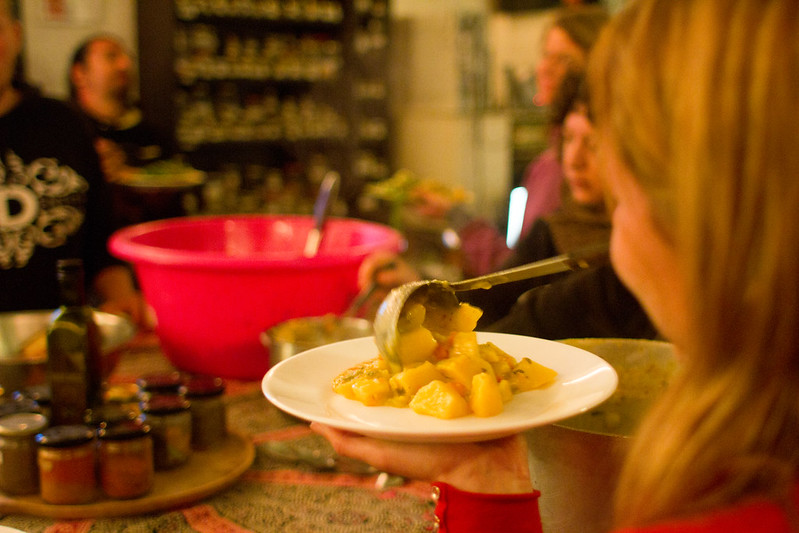 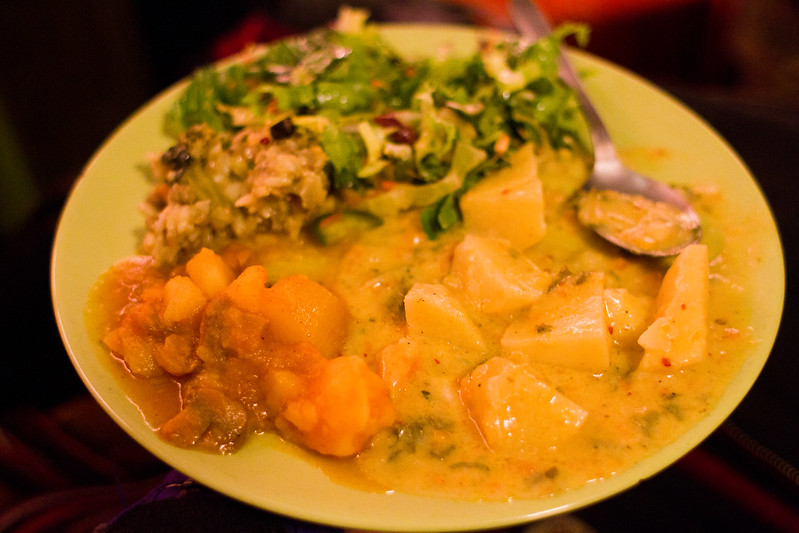 The collection of volunteers had travelled to Edipsos, mostly, from Athens, and there were a diverse selection of young artists, photographers, and those interested in sustainability and looking for alternatives. On the first evening of our stay, the group of us visited a local thermal hot spring, and snacked on greek pastries along the way. 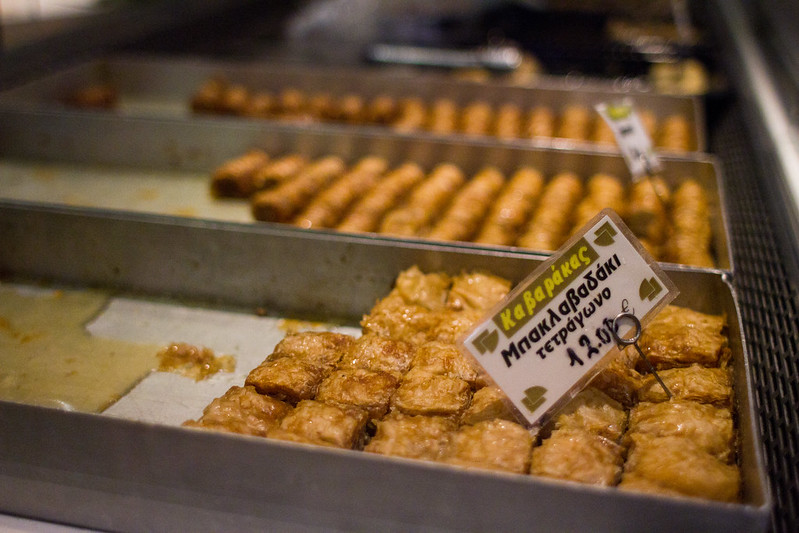 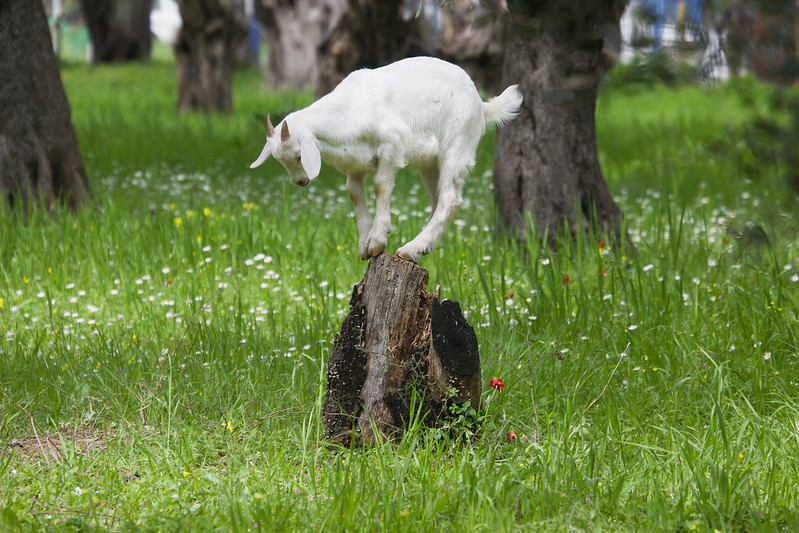 We awoke the next morning in our van, next to a jade green field of long grass, in which an elderly woman herded baby goats. On the other side of the field, was the Telaithrion test site, another of Free & Real’s pieces of land, in which they test various dome and living structures, as well as gardening methods. The test site also houses the constant stream of visitors and volunteers at the community. 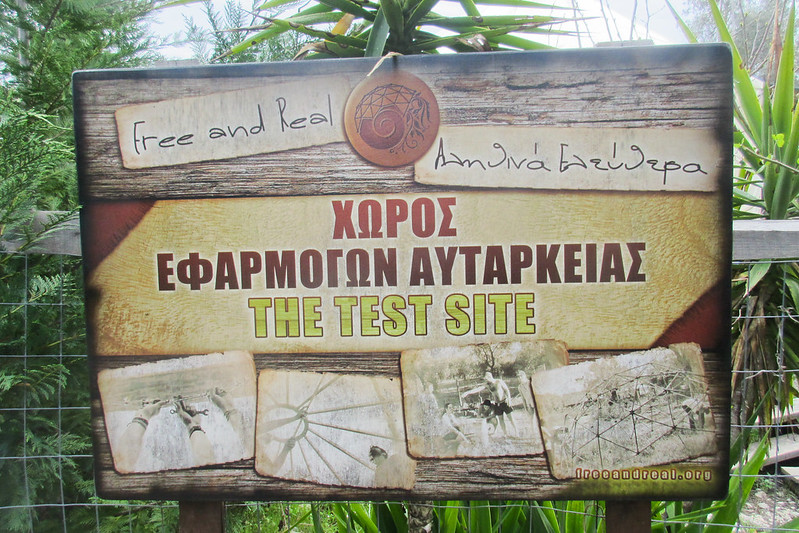 It hit me that it was an interesting contrast, to glimpse both a traditional way of life, the lady with her goats, and in the same scene to watch a group testing ideas for a new world. Free & Real is an exciting community, vibrant and young, rich with positive intentions, and hopes for a better planet. They are at the beginning of their journey as a community, but seem to be hugely successful at envisioning, and then working towards the actualisation, of the visions. What was particularly fascinating was witnessing their understanding of and connection with the interplay between both the modern and the more traditional – they are merging futuristic and forward-thinking technologies and ideologies, with traditional greek knowledge, wisdom, practicality, and care. It’ll be exciting to see what happens next. 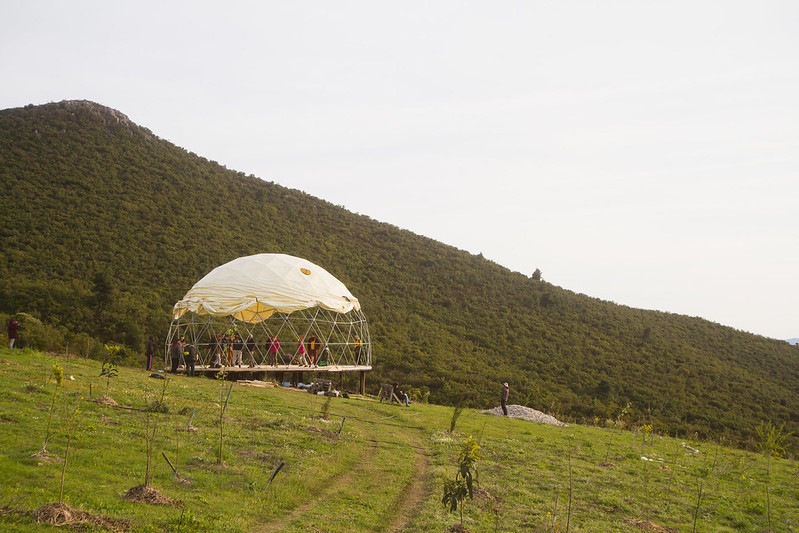 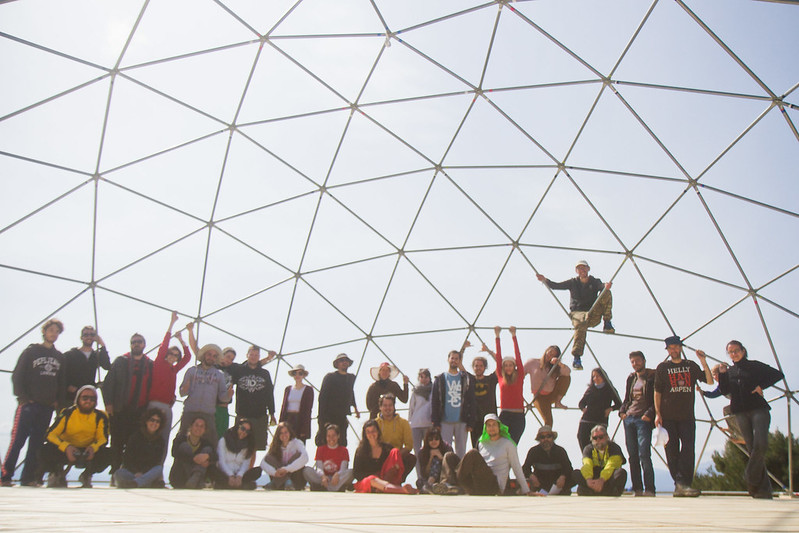 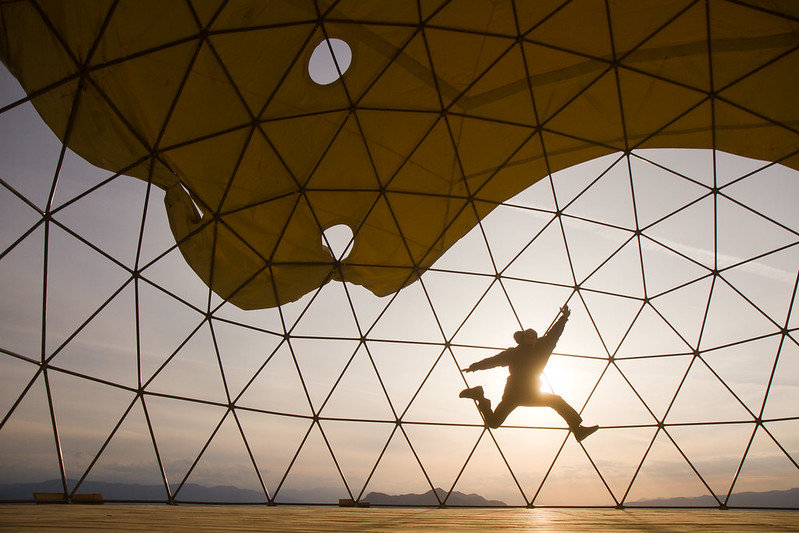 Here’s a link to our Flickr Album from our stay at Free & Real.