Home France Our First Week of 2015 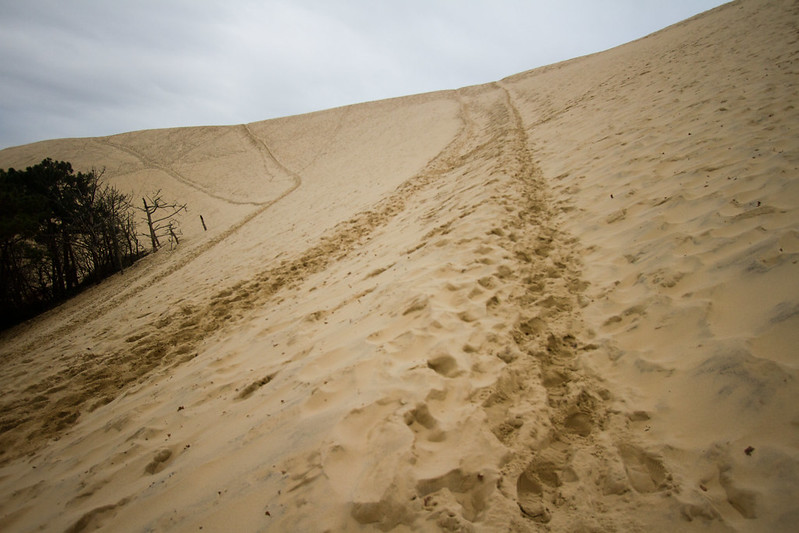 The mist sweeps in over the Atlantic ocean, as we climb Dune Du Pilat, the largest sand dune in Europe, in fact more a series of mountainous waves of golden sand, each tumbling over one and other, forming graceful windswept patterns of pale yellow that rise dramatically out from the forest and ocean either side. 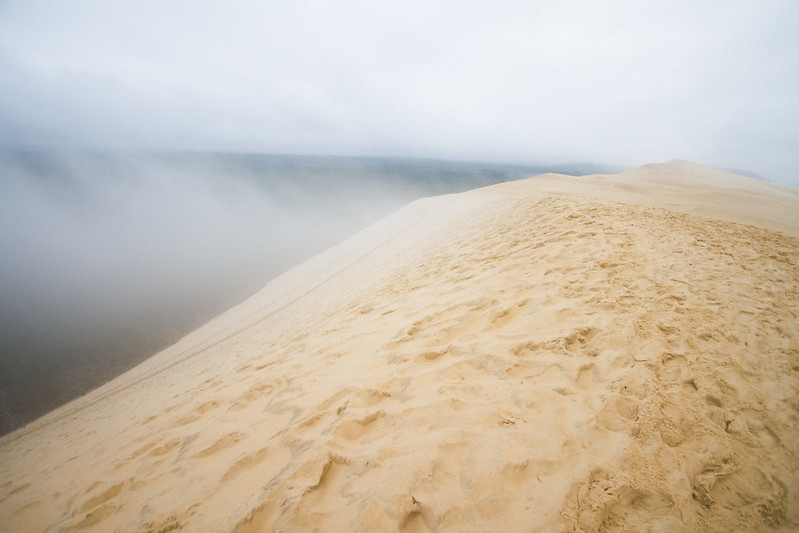 Out of breath, having decided to cut time by climbing the most direct, and somewhat steep, route to the top, instead of opting to tread the slightly less exhausting path that curves around the side of the enormous dune, I reach the dune’s peak, a ridge of sand from which the ocean spreads out before me. The delicate winter sunlight, low and long in the January sky, turns my hair to straw and spun gold. I take off my coat. 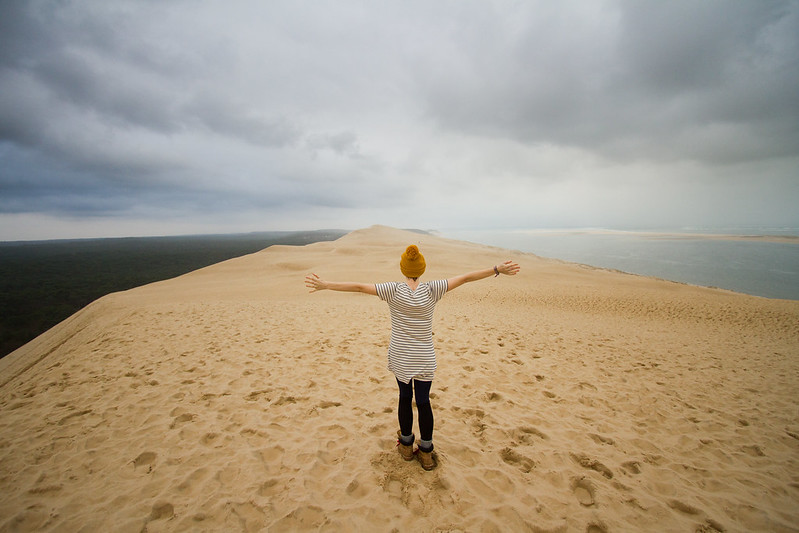 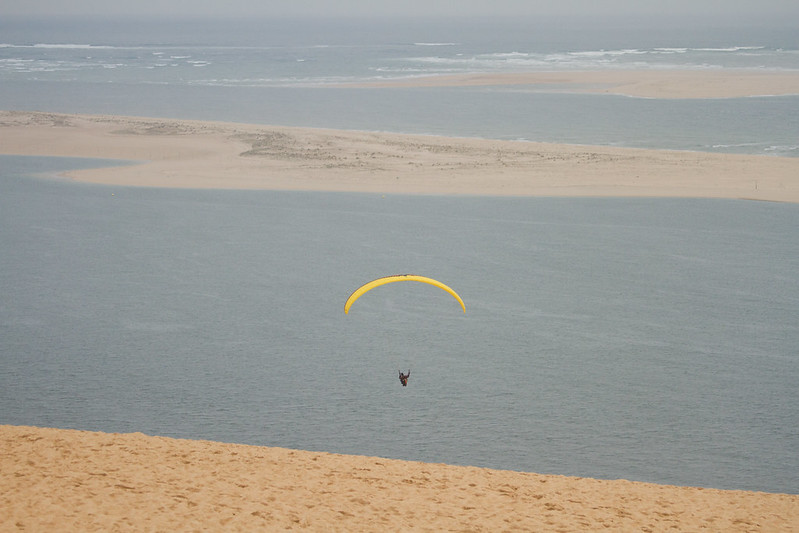 Below me, it’s low tide, and tiny transient islands of sand are separated by snaking silver rivers of gentle seawater. Three para-gliders soar through the air above the beach, effortlessly capturing currents of air like birds in the breeze. I turn full circle from the ocean, after a few moments, and instead choose to stare out at the endless fir forest blanketing the hills that stretch out east to the horizon, a captivating carpet of deep dense green, it feels magical, impenetrable. 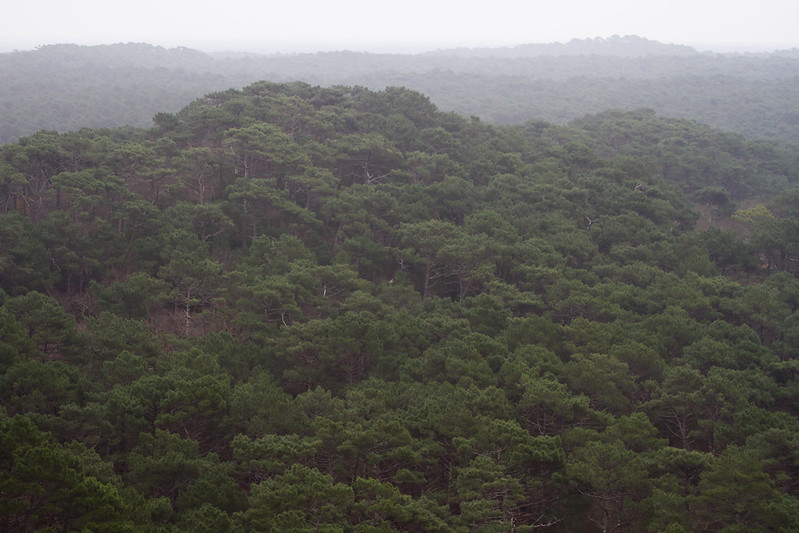 Still, the clouds are rolling in, they’re dulling the silver sunlight, the sky turns something like translucent silk. Also, the wind is picking up, and now, as I gaze out at the forest below, the furthest reaching of the tree’s branches, and the dune on which I stand at the very top, begins to twist with mist, a swirling ethereal dreamscape of pearly grey and green. 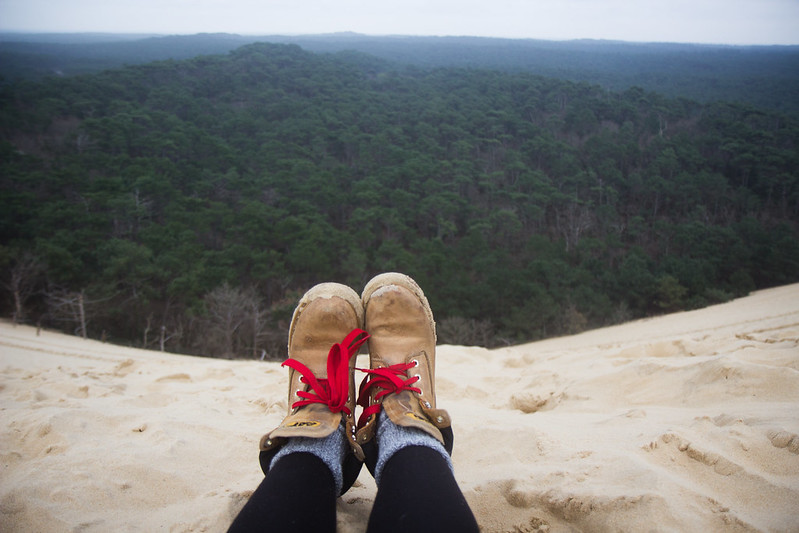 I sit down, and wonder at the mist that envelops me, and the forest below me. How could it be, that it was only the end of our first week of life lived out of our Hyundai H200 self-converted campervan, the van that we’d spent months turning into a home for the both of us, a home for what was to be an uncertain amount of months ahead, complete with a pull out bed, sink, stove, desk, everything we need to eat, sleep, and exist. 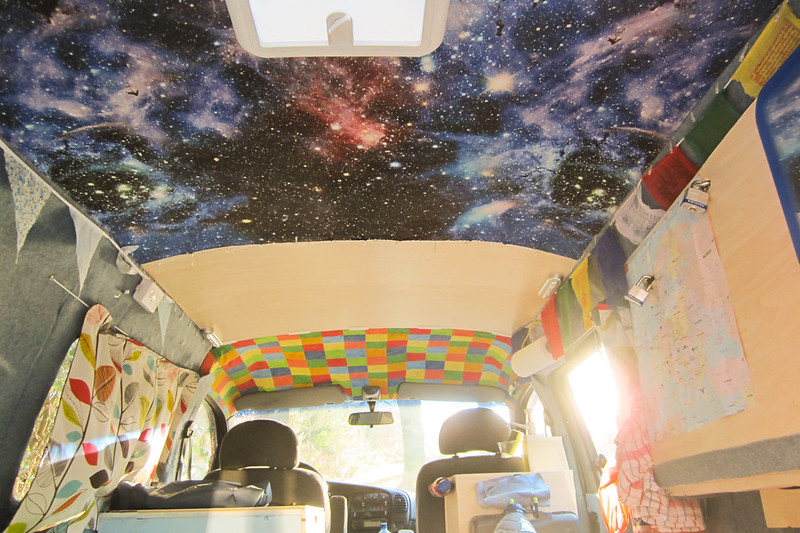 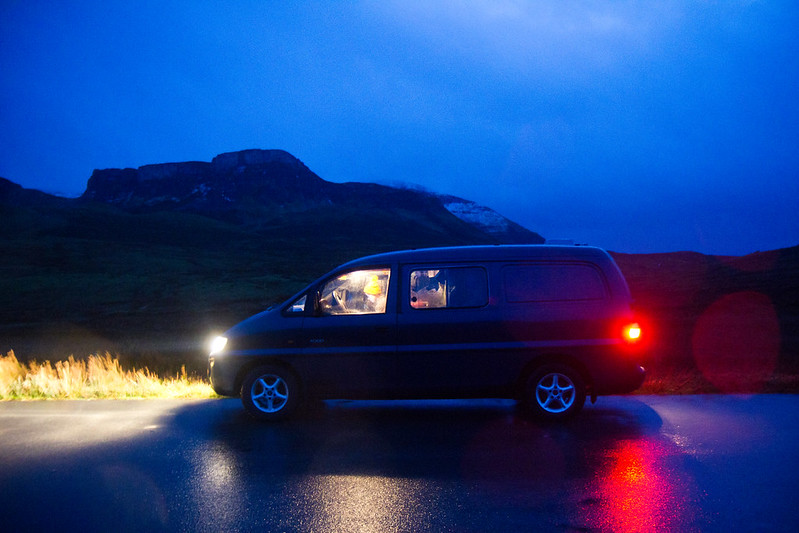 Already, it seemed, the landscape was changing. The nights were beginning to feel warmer, we hadn’t used our fan heater since leaving the UK. We were driving south, as quickly as we could, so that we might find our way to the bustling, meandering souqs, and the crumbling high mountain villages, of Morocco. 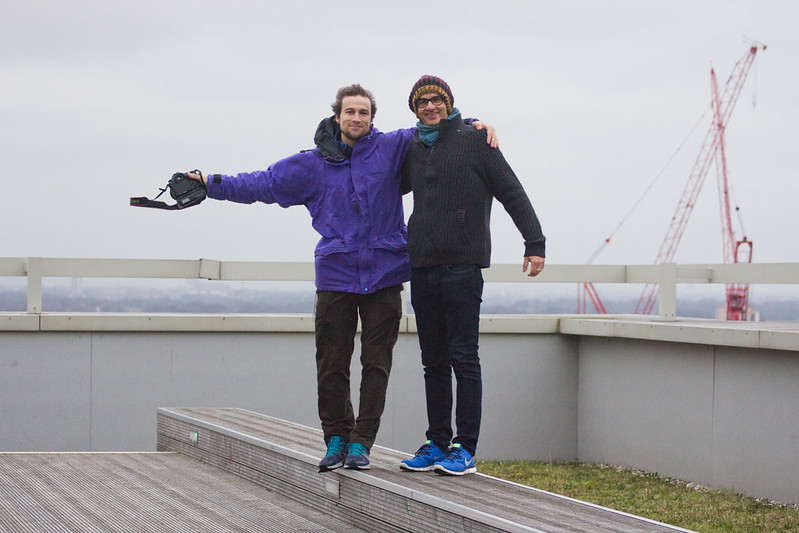 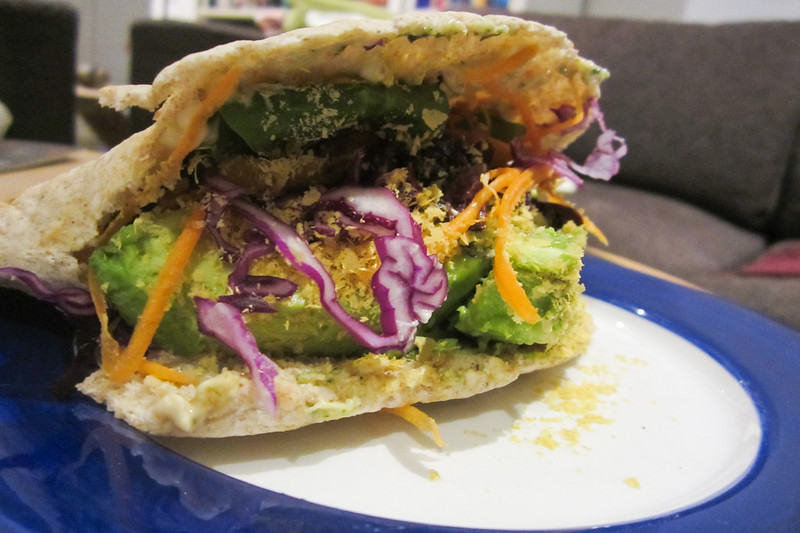 We’d started our journey, quite fittingly, in Birmingham, UK, on the 31st of December 2014, and, after crossing paths with friends in London, where, overwhelmed with hospitality, we’d eaten delicious pomegranate salads in Athlete’s Village, and drank peppermint tea in Shoreditch, and after visiting the hopeful beginnings of permaculture forest gardens in the rolling countryside of southern England, we’d boarded our ferry from Newhaven, and arrived, just four hours later, in Dieppe, France. 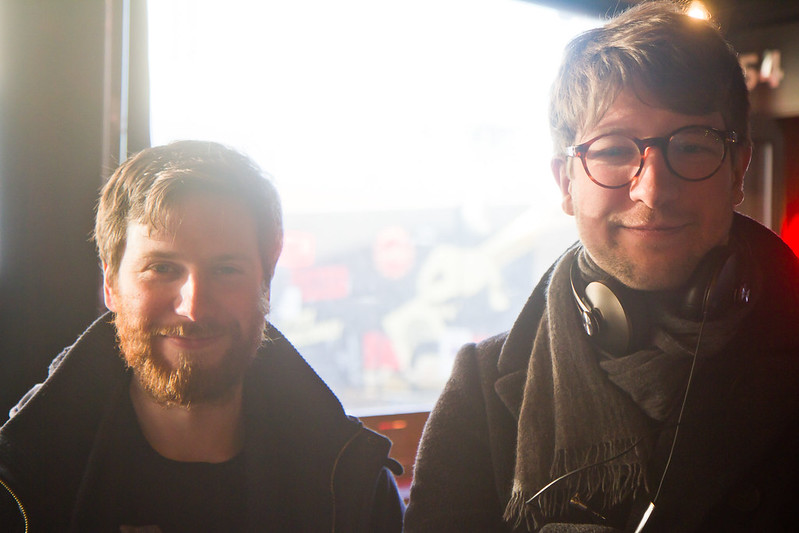 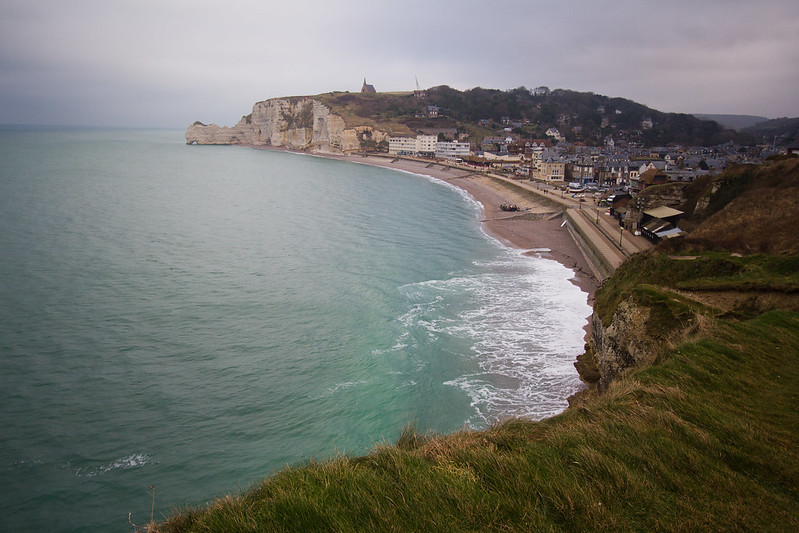 From Dieppe, after a manic Carrefour run for fresh vegetables and fruit, we’d driven along the north, and then west, coast of France, stopping briefly at tiny fishing villages, with their intricate baroque wood and stone buildings, fishermen dressed in yellow dungarees, winching their boats up onto pebble shores, and we’d navigated countless winding roads, through thick fog, roads lit only by the near blinding headlights of fast approaching trucks. We’d slept in empty car parks, that in the summer would have been heaving with tourists, and awoke, more than once, to ocean views. The night before arriving at Dune Du Pilat, we stopped at Mont Saint Michel. 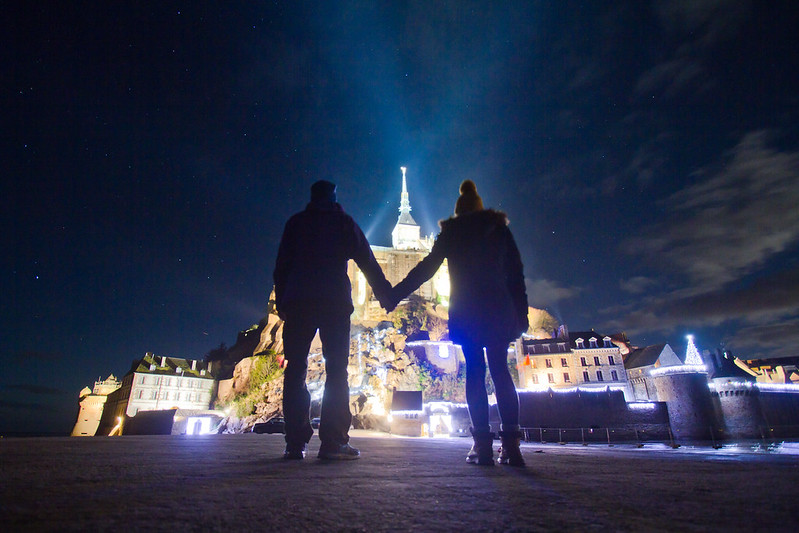 As we approached, Mont Saint Michel had sparkled with glittering blue fairy lights, which lit up the starry winter sky like some fairy tale palace, a glowing blue beacon of light shining out into the stratosphere. We’d climbed the steep stone staircases, and explored the many winding corridors, halls, crypts and chapels, of the labyrinthine abbey that sits atop the rocky island. 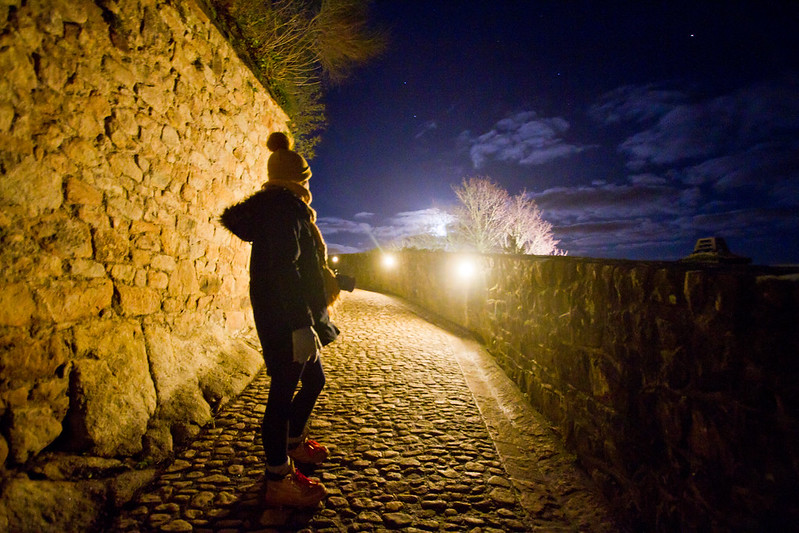 The abbey felt sacred, soft with the scent of incense, which rose through the air in mysterious patterns. Resident monks and nuns silently performed their daily tasks. At the very top of the abbey, we stumbled upon a rooftop garden, quiet, and alive, with delicate grass and flowers, lined with granite arches and stained glass, providing some relief from the harsh, icy winter winds. 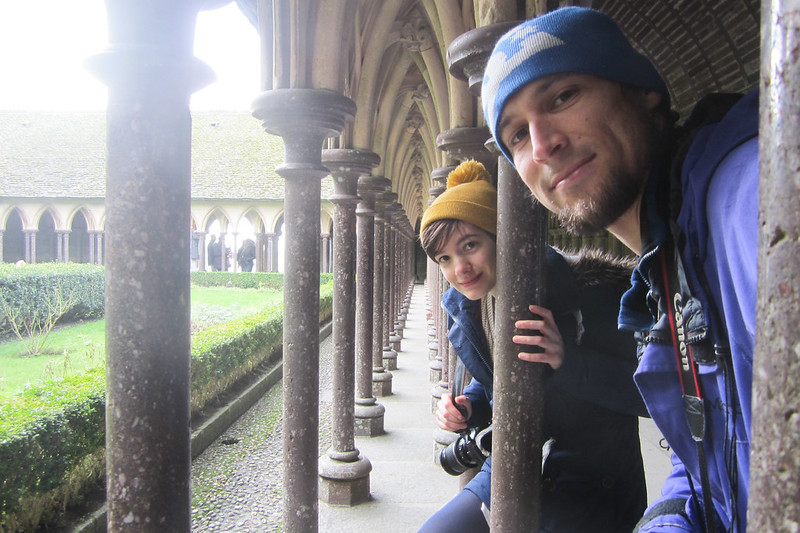 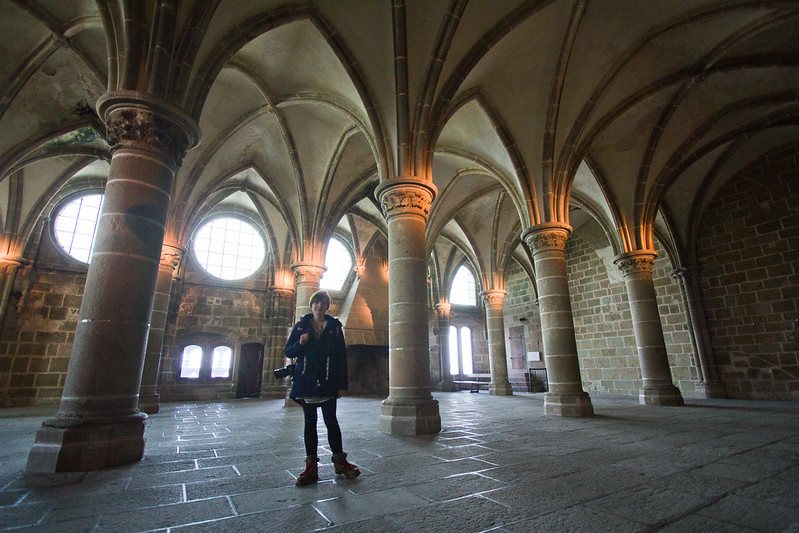 Back to the dune, and I walk out to the very edge, now, to the precipice from which the sand falls away at sharp angles, to the mossy, fern covered undergrowth of the dark forest floor below. I hold out my arms, feeling as if the mist, and the ever increasing wind, moves through me, as if the wind might carry me along with it, if I just let it, if I just jump. 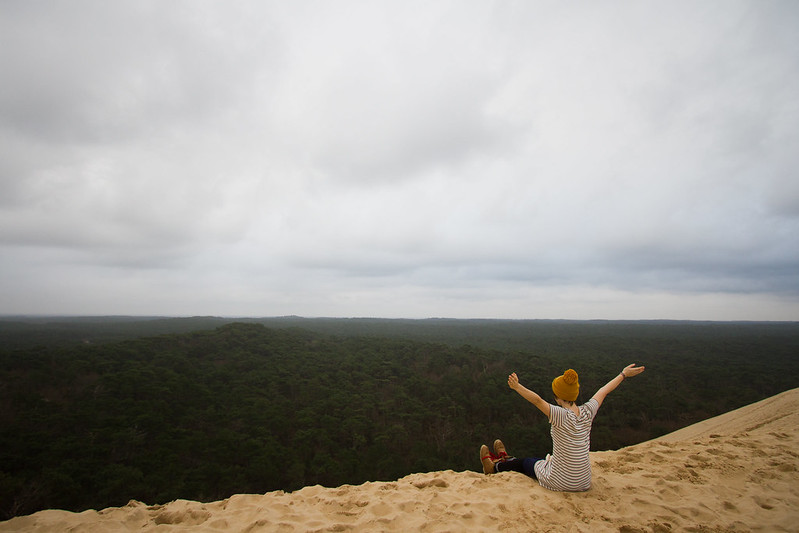 The last week has felt like a lot to take in, a whirlwind of rushing places speeding by the passenger window. The start of a journey like this, one with an uncertain end date, feels something, I think, like jumping off some vertigo inducing edge, dizzying, and enthralling. But there is unknowable strength to be found in simplification, and untold learning in travel. There are so many ways in which you might undertake such a journey, and for now, I’ve chosen to live life out of our van, to focus on the essential, and to explore. Together, Mike and I will chase untamed places, and the experiences, and memories, that hopefully might follow suit. After all, I think, these might be the things by which life is truly measured. 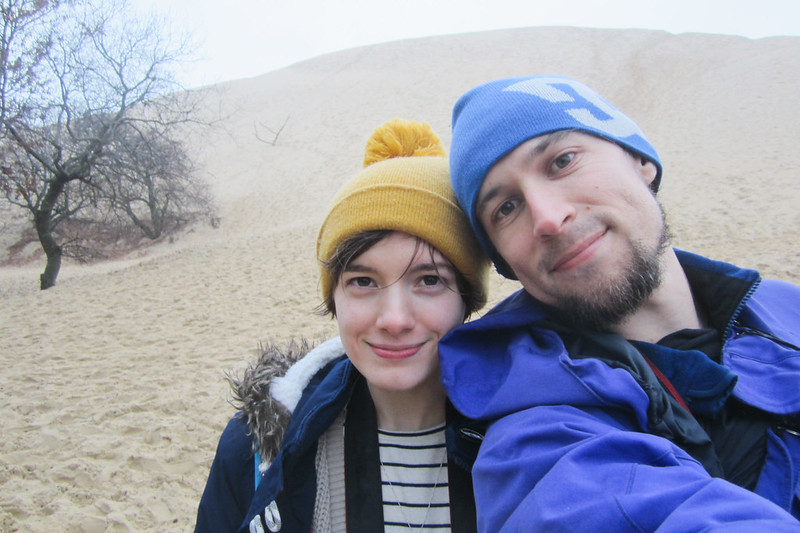 And a huge flickr set of all of our France adventures