The heavy mist swirled and danced mysteriously around us, the air spectral, almost lustrous, instead of oppressive, as we ventured the 300 metres from Longyearbyen Airport, tiny, with it’s two flights a day and one runway, to the Longyearbyen Camping Site, which we were to call home for the next five days of our Svalbard adventure. 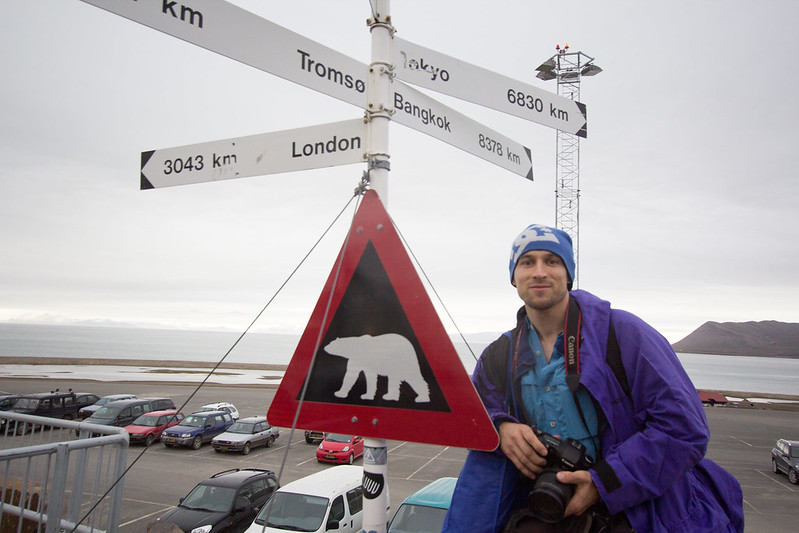 Upon arriving on the island we had felt a little apprehensive as to how it was we were actually going to find the camp site. However, this proved to be no challenge whatsoever. Longyearbyen Camp Site, we discovered, is found just a little further down the rolling banks of the same hill on which the airport, and the famous Svalbard Global Seed Vault, is located. We excitedly exited the airport, and after being greeted by a sign informing us of just how far it was that we now found ourselves from the rest of the world, and warning us of the inherent risk of sometimes curious, and often hungry, Polar Bears, we crossed the quiet road that runs from Longyearbyen Town to the airport, and followed the gravel covered pipeline (a lifeline to the camp site) that parts the emerald green undergrowth of wild grass, moss, the ancient Arctic tundra, fragile and unchanged for countless years, towards the edge of the fjord. Longyearbyen Camp Site sits a short walk from the rugged shoreline, and is not difficult to spot, a wooden building painted inky blue and deep red, surrounded by a rainbow of canvas, prayer flags, camper’s clothes left out to dry, and a line of white bicycles propped against the building’s stilts. 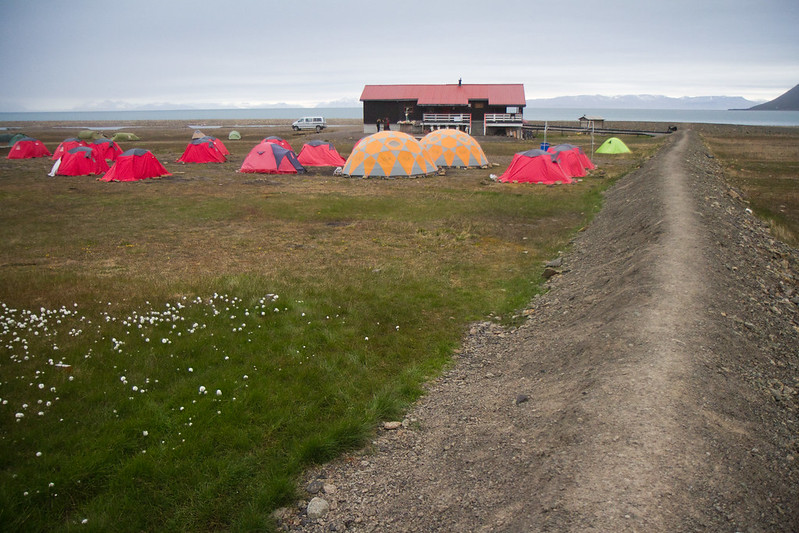 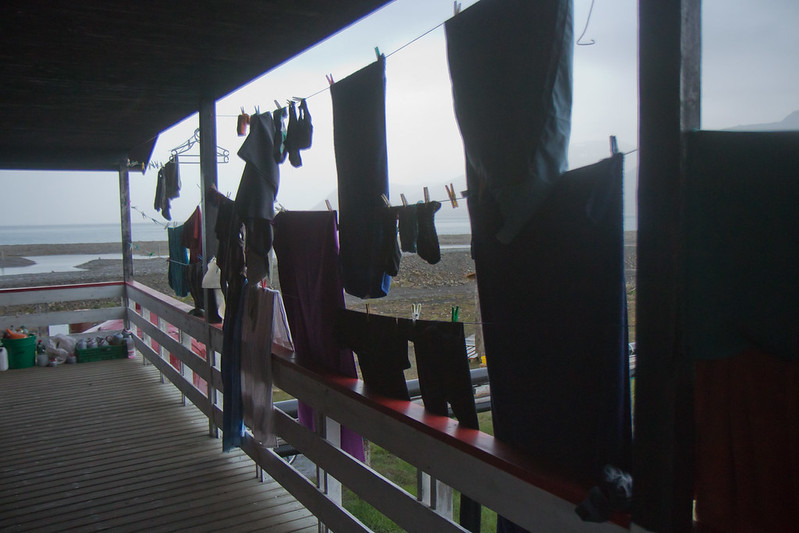 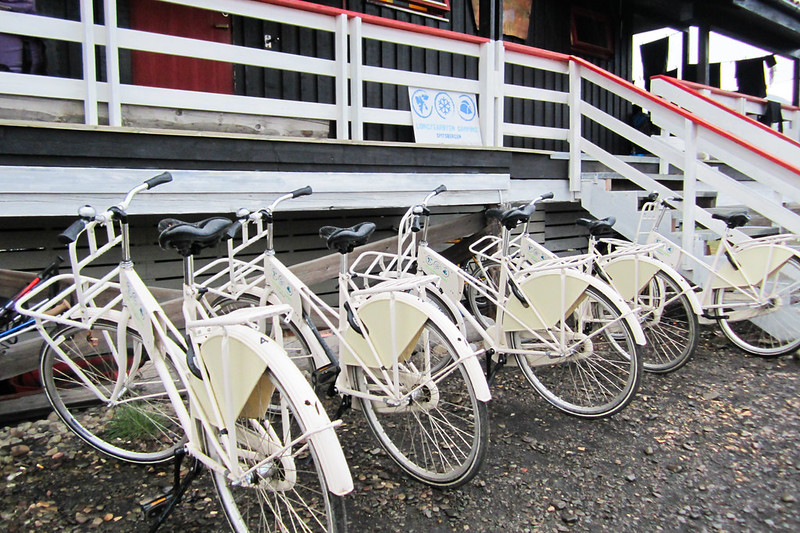 Longyearbyen Camp Site is the only fixed camp site on the island of Spitsbergen, in fact, the whole of Svalbard, and also the northernmost fixed camp site in the entire world. The camp site was founded in 1975, to coincide with the opening of the new airport, and sees between 1500 and 3000 visitors per season. The camp site is equipped with a full range of nice facilities, including bathrooms, hot showers, and a wonderful kitchen complete with two kettles. We found fairly-traded weighty chocolate bars, (a necessity for survival in such a harsh climate,) as well as oats, herbs, pasta, and other food that previous campers left behind. 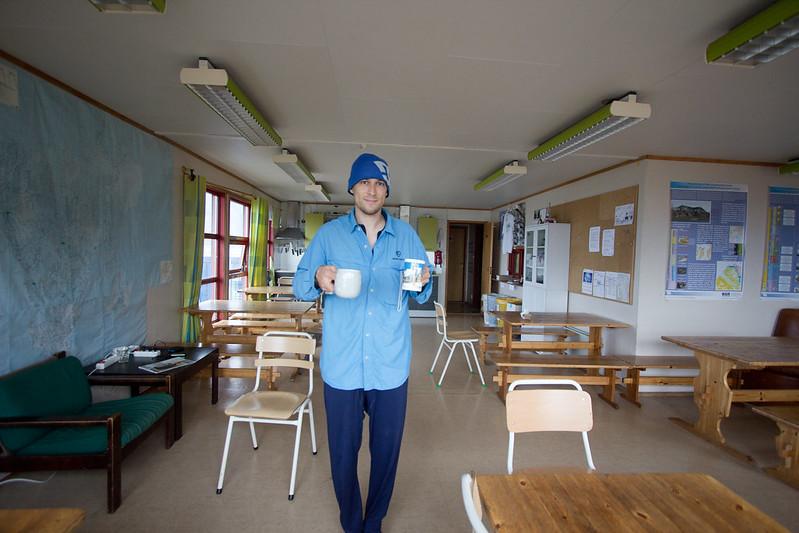 The camp site is open for a short spring season, and a longer summer season, which starts on a different date every year, but is guaranteed to have ended by mid September, when the snow returns, the temperatures plummet, and the sun begins to sink behind the horizon. It costs 120 kr per person to stay at the camp site, per night, which converts to about $20, and we found this to be an incredibly reasonable deal, when taking into consideration the prices of other accommodation on the island, which tend to be rather high. You can rent sleeping bags, camping equipment, including tents, and bicycles. They even offer to set you up a tent before you arrive, if you wish. You can also stay at Longyearbyen Camp Site out of season, for free, however the amenities are all closed, and you’ll need to bring some serious low-temperature gear. 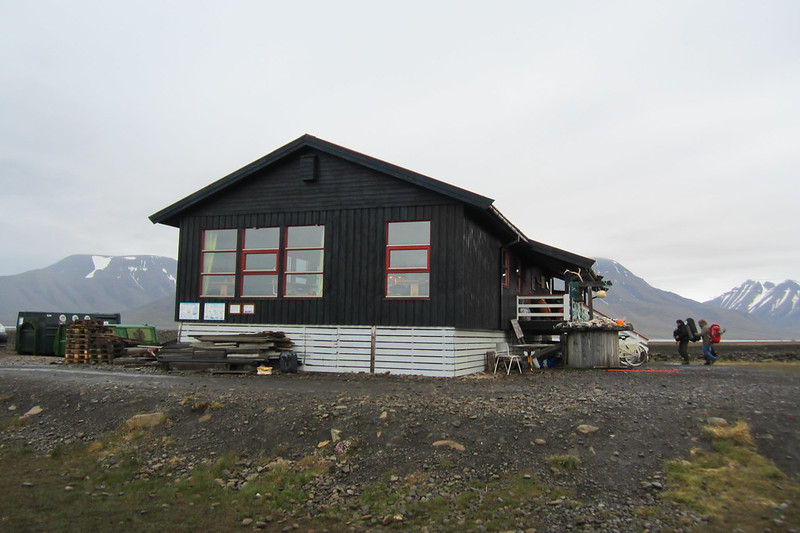 We crept towards the camp site, tiptoeing, almost, as quietly as we could. The time was now 2am, however we were ushered into the camp building by Katya, who was employed by the camp site, and was used to visitors arriving in the small hours. She informed us of the few rules of the camp site, for example, we were not to wear shoes inside the building, and gave us the sleeping bags that we had rented in advance. We signed a form, agreed our payment, and hurriedly set up our tent. We scrambled inside, and exhausted from the day’s activities, soon shut our eyes. 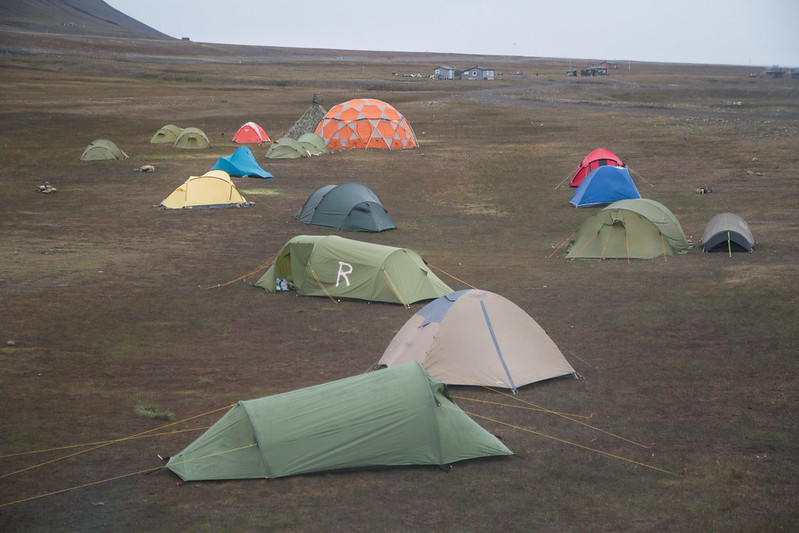 After a broken night’s sleep, our bodies struggling to adjust to the sense of timelessness that accompanies the 24 hour sun, but lulled to sleep by the fine patter of gentle rain and the quivering of our tent in the breeze, we awoke, shivering a little, but luminous with anticipation. It was 5am, and as we unzipped our North Face tent, dawn flooded in, and we were drenched, dazzled by, silver light, which in the summer, shifts, but never surrenders, to the night. Around us, infinite dew drops sparkled like galaxies, and the fjord glittered exquisitely in the delicate sunlight, which fragmented in the water and mirrored the magnificent snowcapped mountains that loomed along the horizon. The smell of saltwater, intertwined with the more subtle, sweet, scent of wildflowers, was invigorating, and the silence in the air, almost tangible, felt energized, illuminated. 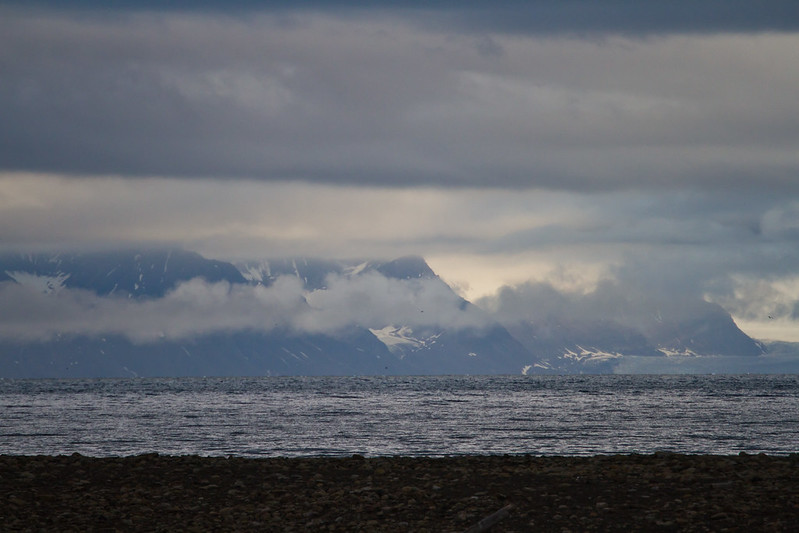 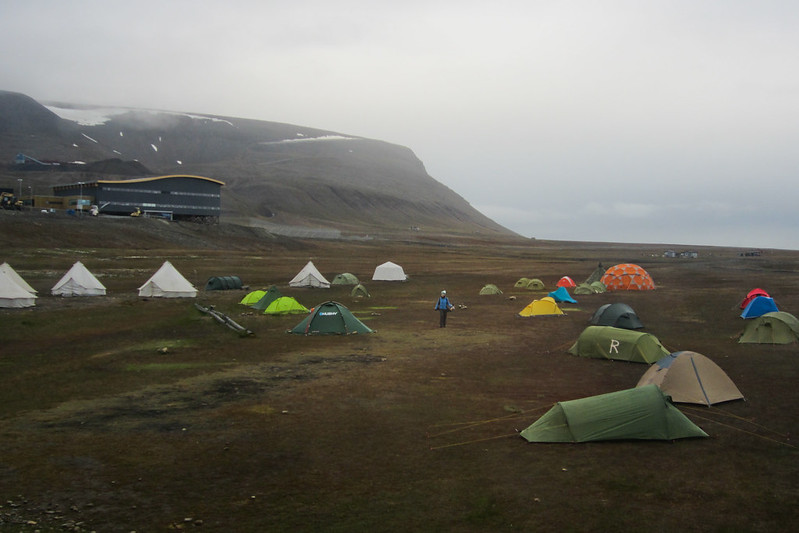 Excitedly, we shuffled into our shoes and coats, grabbed our cameras, and for a few moments, watched as the Arctic Turns that live along the beach, (which are rather defensive of their home, to the point of aggression and injury if you are unlucky enough to get too close,) hovered, glided, drifted, and danced above our heads, twisting and diving, guarding their nests and chicks below. 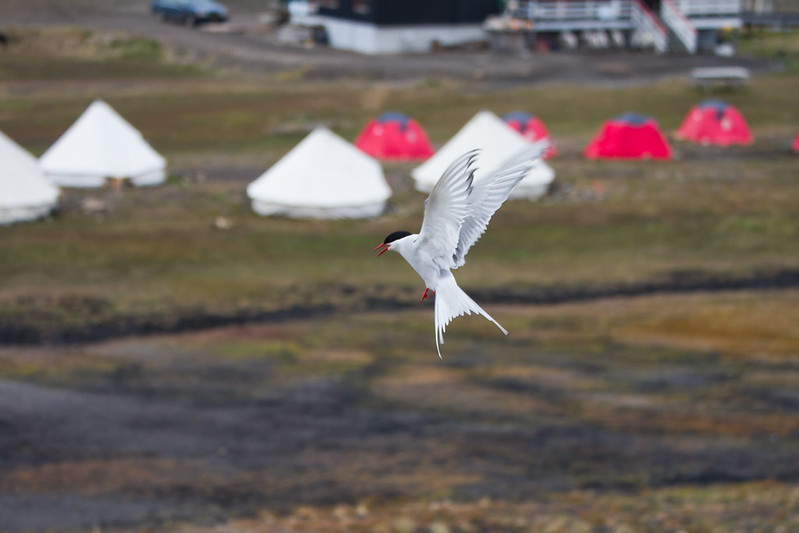 We then made our way to the kitchen, where we breakfasted on steaming peppermint and peach tea, patterns of steam rising from our cups, and our bread and avocados that we had brought with us from Oslo, together with some chocolate. The kitchen was quiet, we were the only people awake, and as such, decided to take our time, charge our batteries, and warm our bodies. 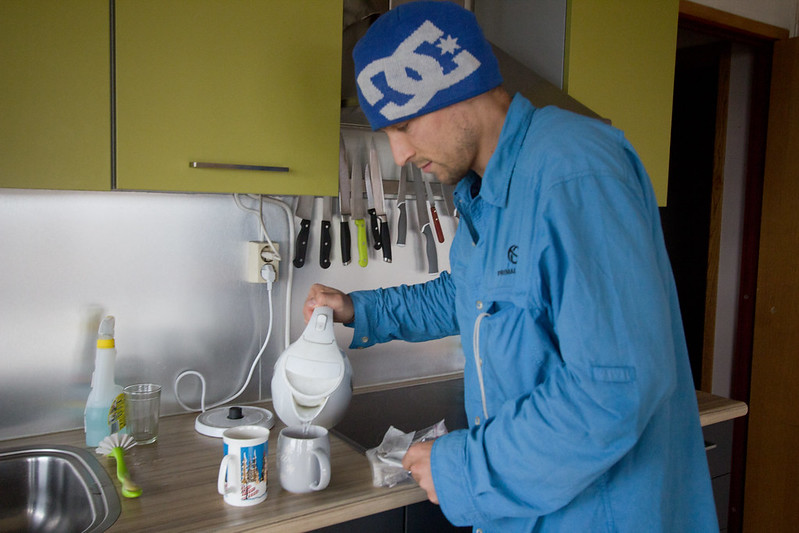 After an hour or two had passed, we decided that the time was right to start exploring, and that we would head towards the town of Longyearbyen and see what it had to offer, along with running a few errands. We had even heard tell of free waffles, and so we made our way outside, zipped up our coats, quietly unlocked the numbered bikes that we had pre-booked a couple of days before arriving, adjusted our seats, and jumped on. 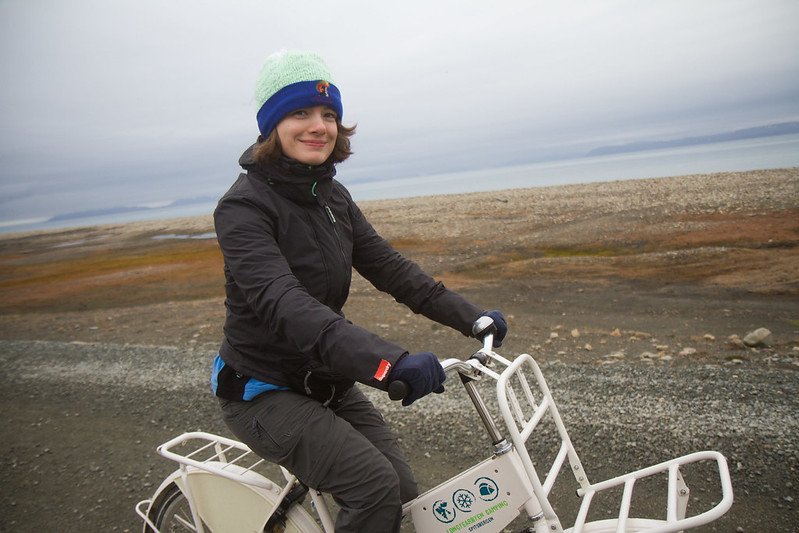 From the camp site, there is a gravel road that snakes alongside the edge of Advent Bay fjord, and reassured that, in the summer, at least, and with good visibility, there was little risk of polar bears, we began to follow the road, hurried at first, to avoid the birds, and then leisurely, stopping every now and then to pick up pebbles and, with slight disbelief, and immense gratitude, shoot photos of the incredible location that we found ourselves in. 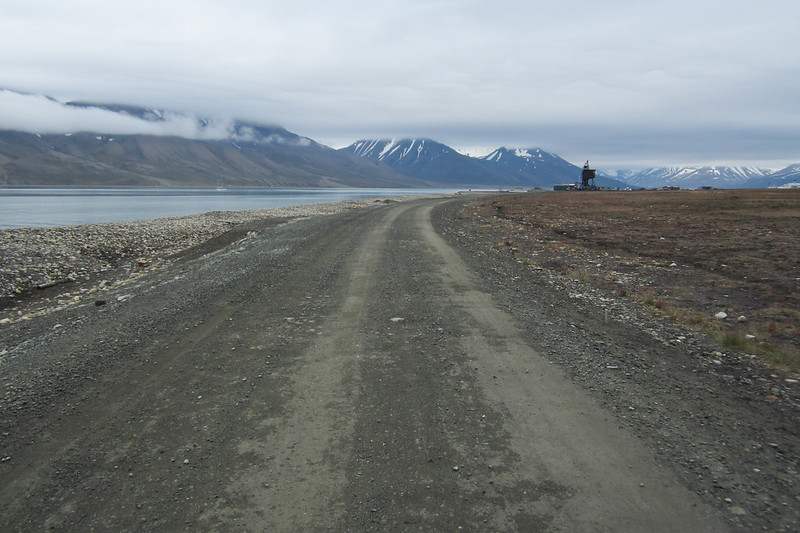 Ten minutes later, the gravel road turned away from the shore, and transformed into the paved main road that leads to Longyearbyen. As we cycled ever closer to the town, we passed tiny waterfalls, snowcapped mountain views, a harbour, a cruise ship, and then, numerous coal mines, both used and dis-used, miscellaneous mining machinery, and shipping containers, all serving as reminders of the reality of industrial man, the complexity of life in such a harsh environment, and of our intricate relationship and connection to nature. 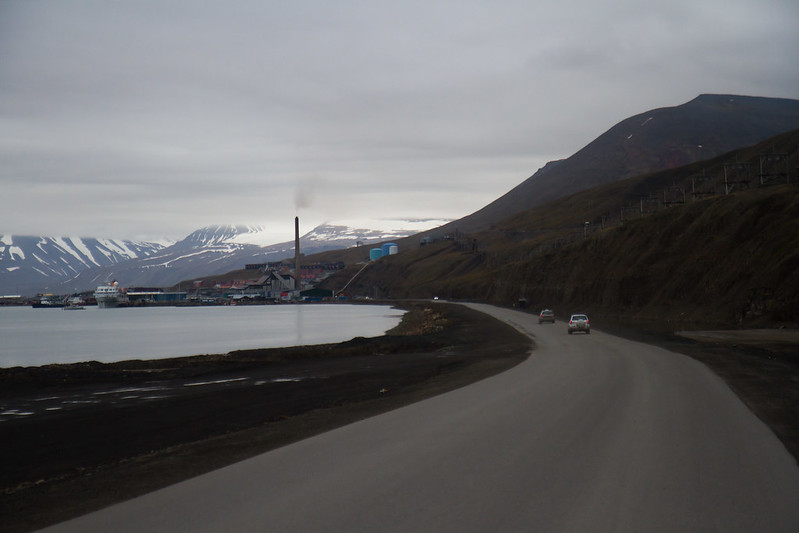 The man-made scars etched into the landscape was a radical contrast to the profound and immeasurable beauty of the untamed wilderness that surrounded us. As humans claw ever further for finite resources, it would seem nowhere is out of reach. We were intrigued, and as we made our last turning towards Longyearbyen, we realized that Svalbard would prove to be like nowhere we had ever visited before. We could not wait to discover more. 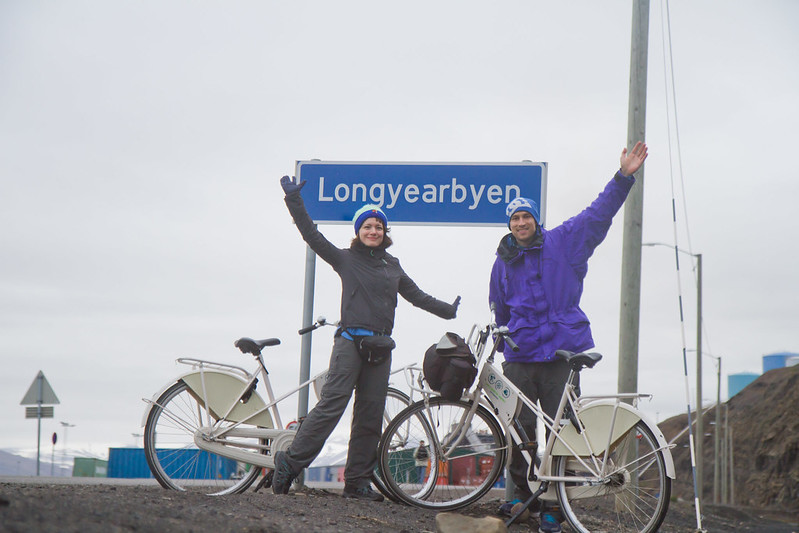 Part 3 Coming Soon!
Check out our flickr set of Svalbard