The next few days of our Svalbard adventure flew past, they felt almost fleeting, though the Arctic summer, and the midnight sun, are strange and surreal things, pulling night and day into a magical three month long sun-drenched afternoon; a timeless dreamscape punctuated only by subtle changes of light, slow rolling mists that would once in a while accompany the early morning hours, sweeping effortlessly over the fjord, and the gradual shifting of a pale and wintery sun across a pastel sky, floating low, and then high, above the vast glacial wilderness, unchanged for thousands of years, below. 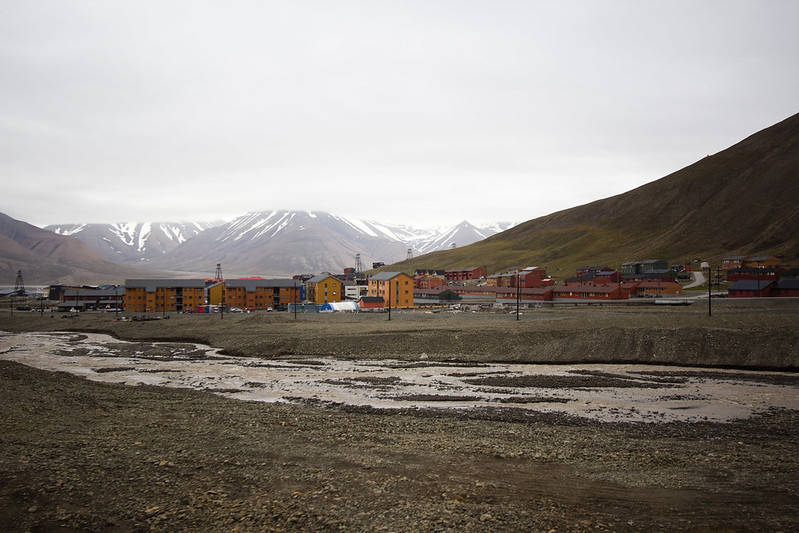 Our days were a blur, a whirlwind of bicycle trips to Longyearbyen, fighting against the ever present and quite often cutting wind, returning with bodies both exhausted, and exhilarated, our cheeks and fingers stinging a little. 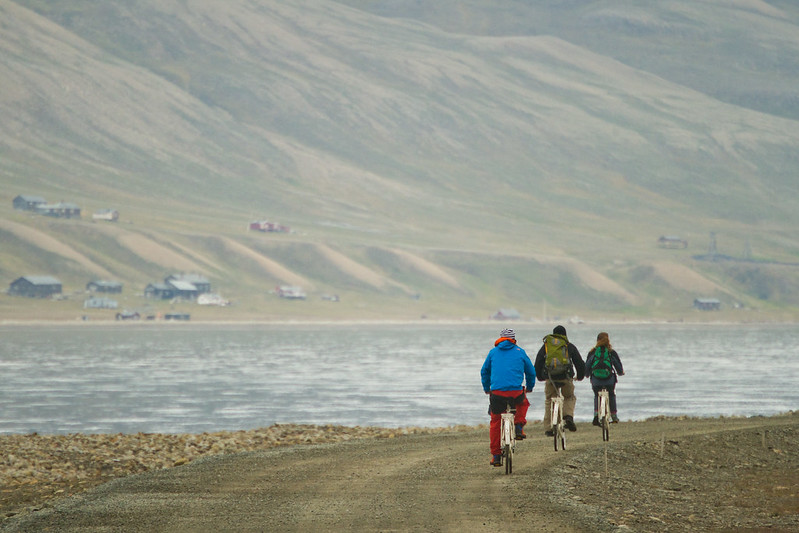 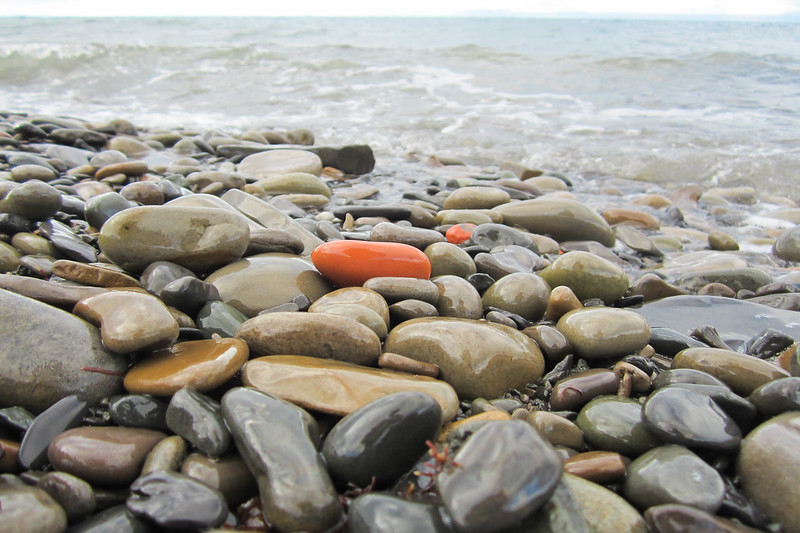 Some afternoons were spent taking long walks along the pebble beach that ran parallel to the road to Longyearbyen, and we would step on red and black polished stones, build cairns, and marvel at the tranquility, which felt tangible, almost transformative, and the natural diversity and peaceful silence that surrounded us, and the evenings were spent in the camp kitchen, where we would drink countless cups of peppermint and peach tea, and eat heaping plates couscous and avocados, before returning to our tent for short bursts of sleep under the pattering of rain and the blue glow of sunlight through canvas. 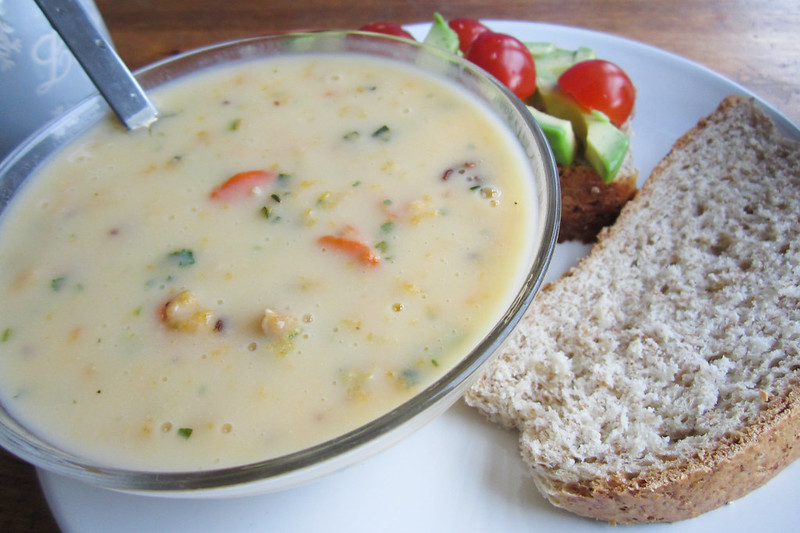 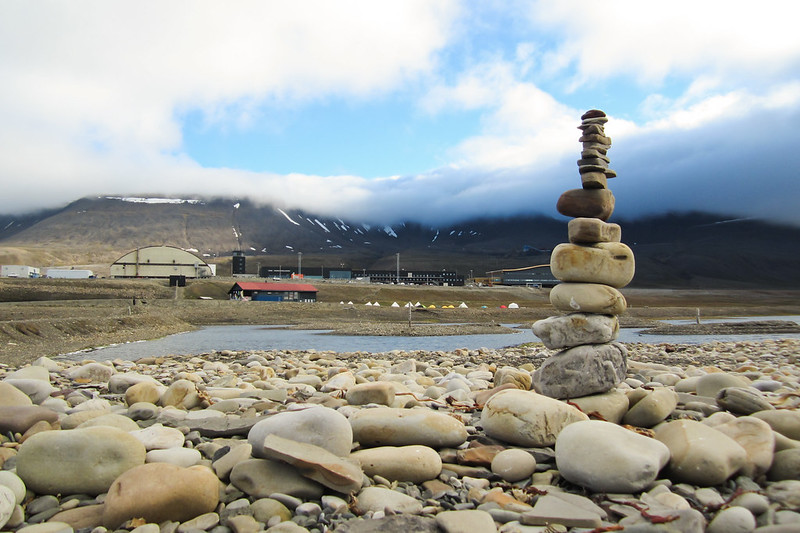 Without really realizing it, we were fast approaching the end of our brief stay on Svalbard. To mark the end of our visit, we had decided that we were to go kayaking, and that the best plan, to allow us to keep to our budget, would be to try to arrange for our own kayak, saving us the money we’d have spent to go on a guided tour. After a series of emails, and telephone calls, we found ourselves in the Longyearbyen Tourist Information Centre, which is located in the same building as the museum that we later visited, next to the university. Whilst there, we met a lady named Lena, who had moved to Svalbard, from Russia, a couple years ago. After a brief conversation, she suggested that, in exchange for a bottle of wine, we might borrow her car for a couple hours, to explore the island a little further. Amazed by her generosity, without hesitation we took her up on the offer, and climbed into her car. After a few minutes getting used to the manual transmission, and with Mike at the wheel, we were off, driving first to the top of the town, towards the glacier that looks down on Longyearbyen, past a small graveyard and a colourful school, up into the valley. 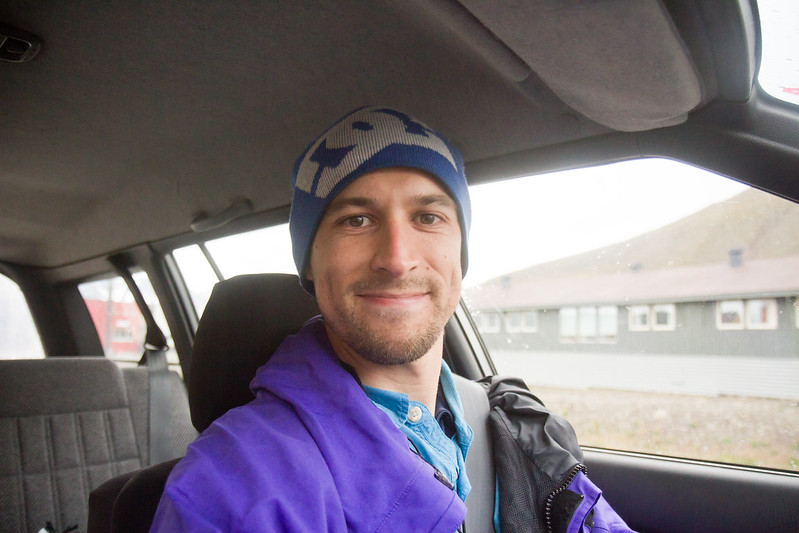 We then made our way towards Mine 7, one of the many abandoned coal mines of Svalbard that we had heard stories about, some distance further along the road that we had, a few days previously, stopped cycling down, in our reluctance to travel too far out of Longyearbyen unprotected. 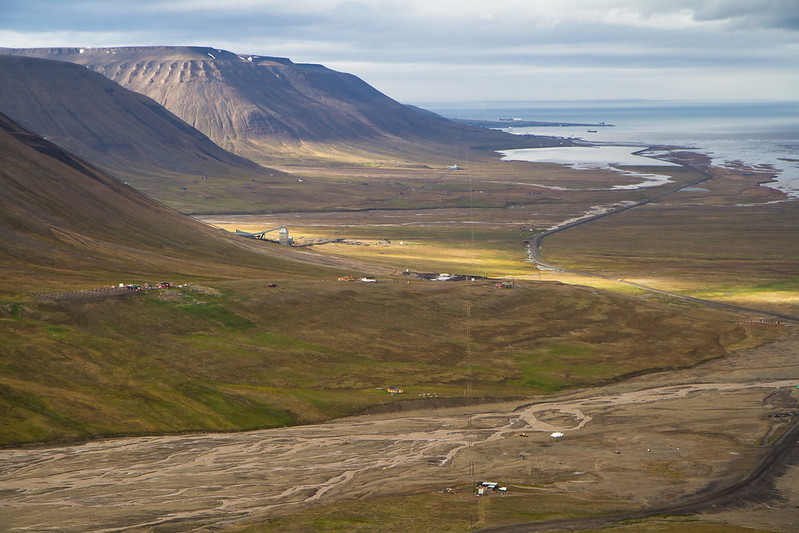 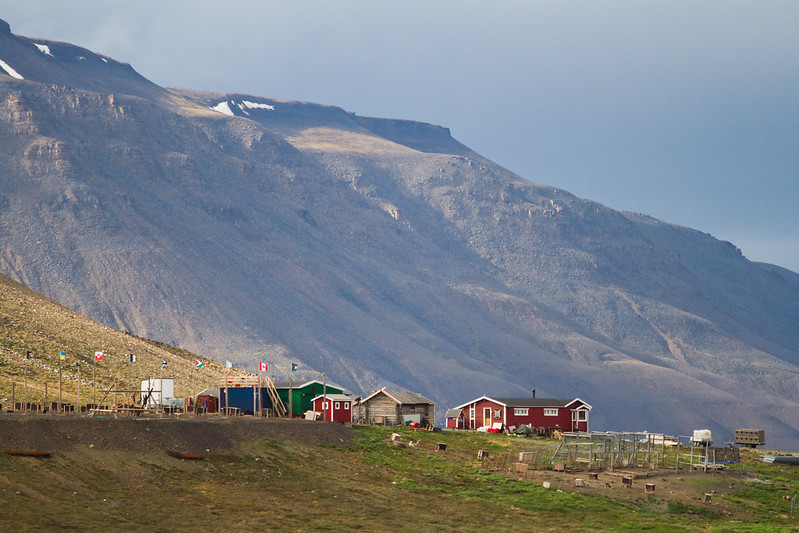 As we travelled the road, which parted the black shore and the rolling hills that greet it, we passed coloured houses, stacked on hillsides, and then, as we journeyed onwards, a flooded wilderness, earthy valleys every shade of green and grey and blue imaginable, a solitary yurt, and ghostly abandoned cabins, hinting at difficult history. 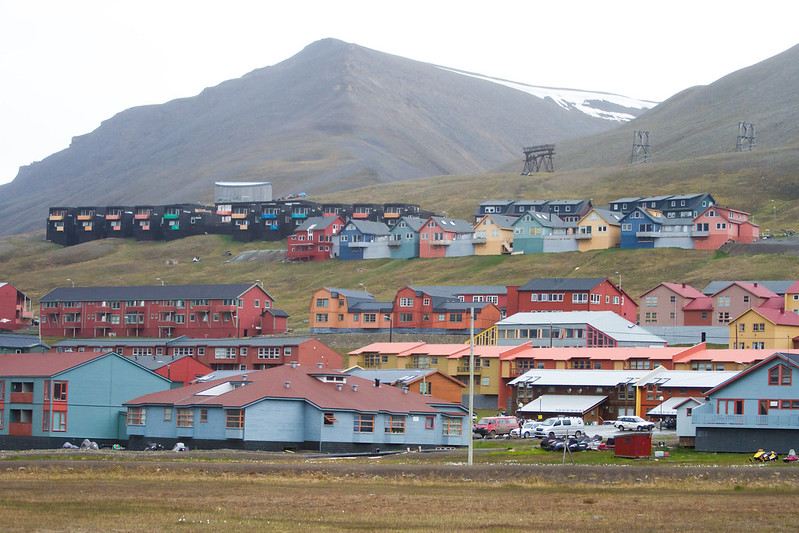 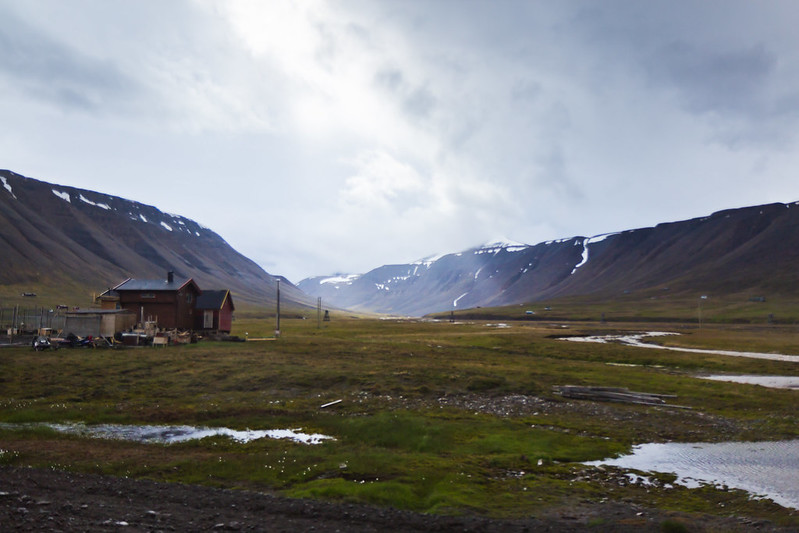 Before we knew it, we had left the paved road and now shared the road with a dozen or so huskies, pulling sleds on wheels, and hikers bearing rifles, and began to climb a steep and twisting gravel mountain road, cut into the deep grey mountainside, hundreds of feet of sheer drop between us and the Arctic tundra below. 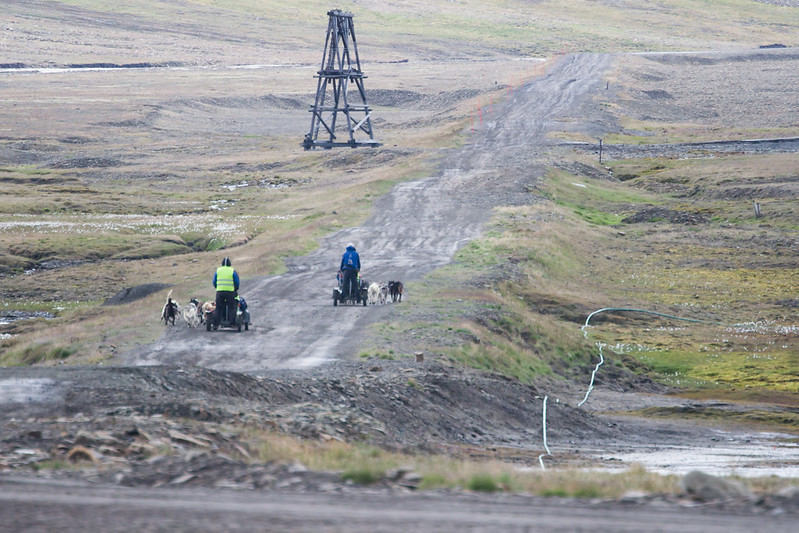 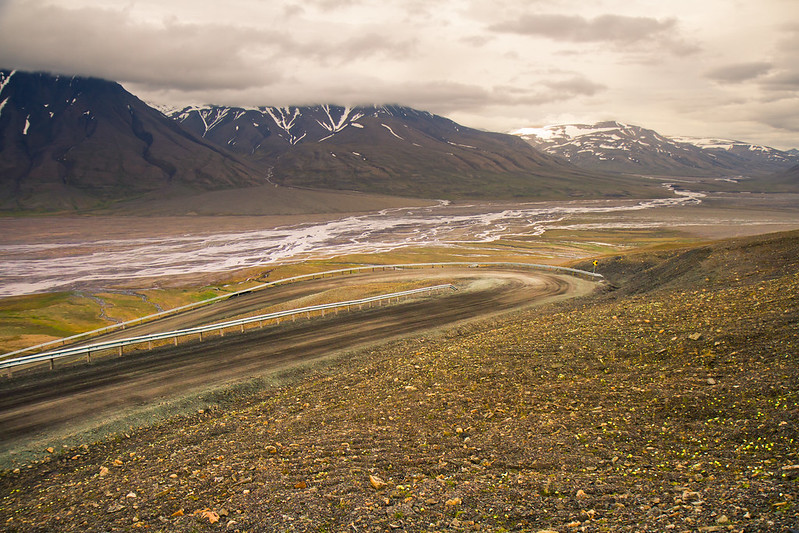 Eventually, after what had felt like a dizzying climb, and having managed not to stall Lena’s car, nor lose it over the edge of some vast treacherous cliff, we emerged at the top of the mountain. Relief at having survived our seemingly somewhat perilous journey was instantaneously eclipsed by awe, as we surveyed the scene that surrounded us. Two huge satellites, sentinels of this windswept world we now found ourselves, loomed over us, steel giants cutting into the sky at calculated angles, our only companions save two reindeer a couple hundred yards away, leisurely grazing on the mountain’s carpet of wildflowers and hardy grass. 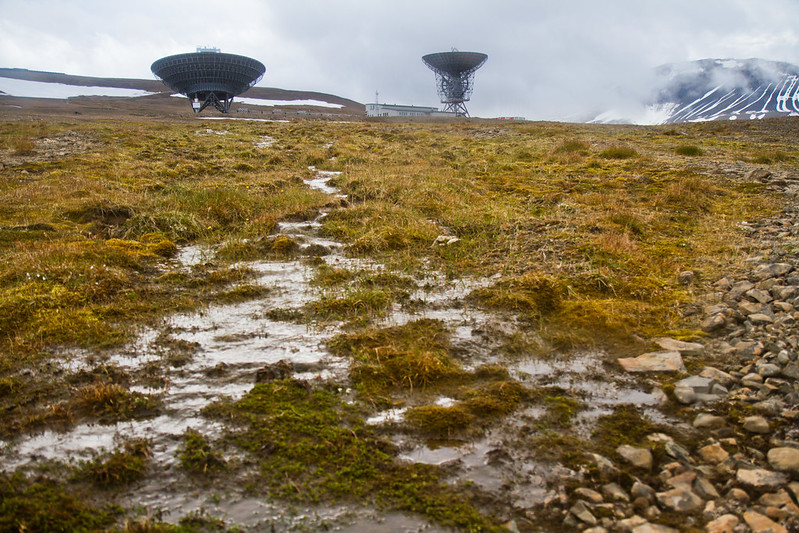 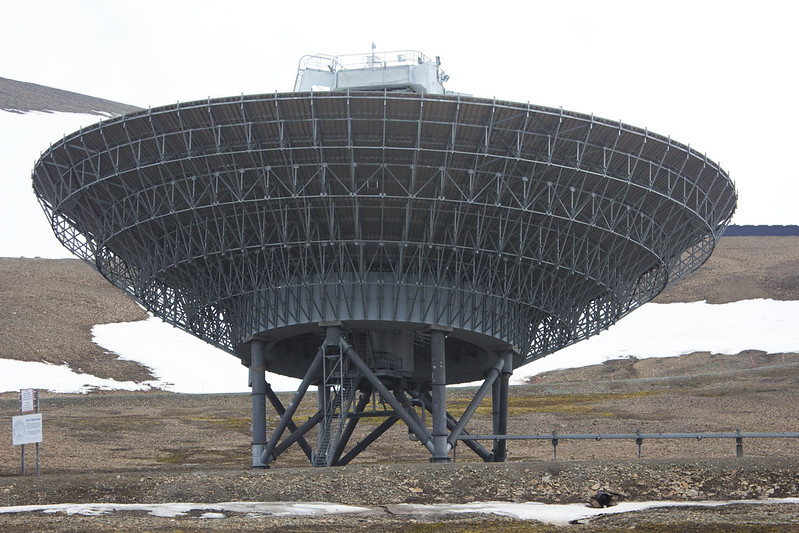 We parked the car and began to hike, though the wind was bracing, over to a manmade lake that seemed to fall off the very edge of the mountain, a pool of sun and swirling waves that mirrored the sky above, capturing the glowing gaps between clouds, shattering sunbeams into a million pieces on it’s surface. We lingered here a little while, captivated, as the wind grew stronger, gusting and brushing, shifting patterns through the long grass. We watched the intricate movements of the water in front of us, and the reindeer that meandered across the mountain-top. We were unaware of the icy mist that had started to roll in around us, nor the gentle rain that had begun to finely fall, until suddenly a rainbow burst into being right before our eyes, it’s subtle spectral magic, revealed and held in the sky for the briefest of beautiful moments, shading the endless layers of grey and brown strata that stretched out in the valley below us faint pastel tones. 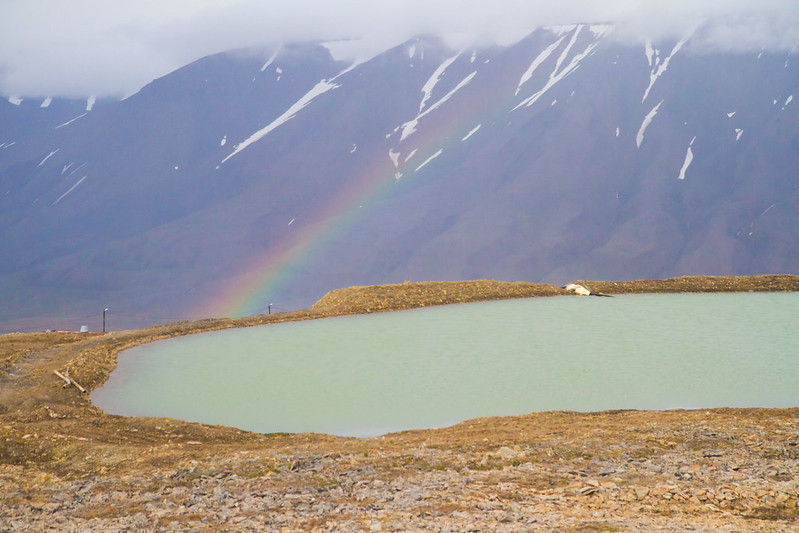 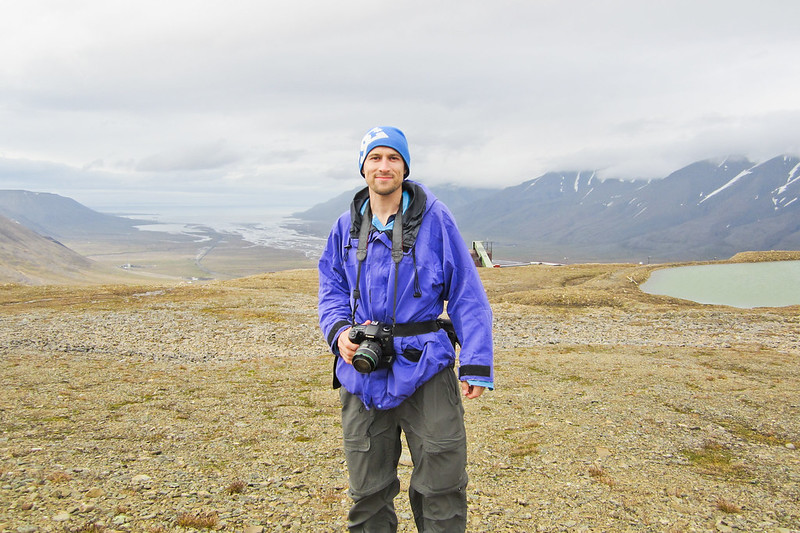 Eager to further explore the tiny section of Svalbard we had access to, whilst we had the time, we decided to make our way back, through Longyearbyen, towards the airport, in an attempt to try and discover whatever it was that lay beyond our campsite. 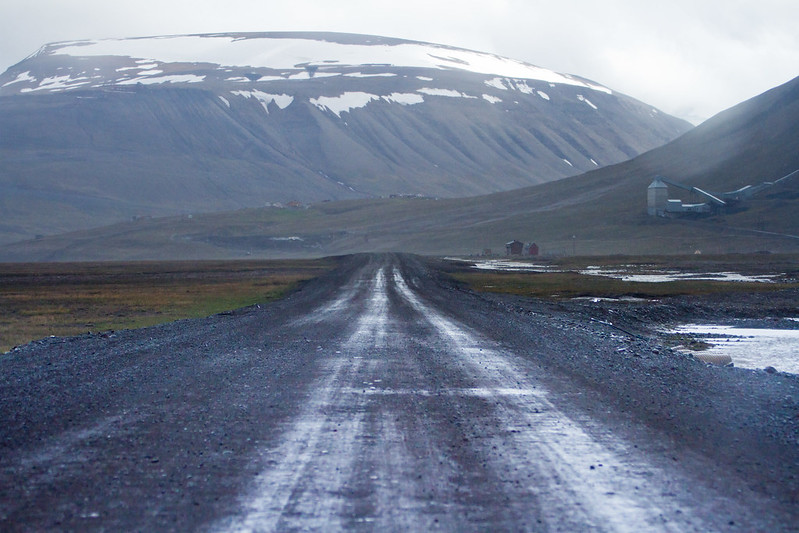 We backtracked through Longyearbyen, and once we had made it to the airport, took a right turn, and found ourselves bumping and bouncing along an increasingly difficult muddy track, in truth more suitable for 4x4s, however we were undeterred, and continued onwards. The dirt track road was lined with painted wooden cabins, and as we travelled further, these cabins became more and more spaced out, until we reached a turning point in the road, which brought us to the most incredible sheer black valley, the rugged shoreline of which was dotted with a small number of tiny cabins, far removed now from the town of Longyearbyen, on the edge of real wilderness. 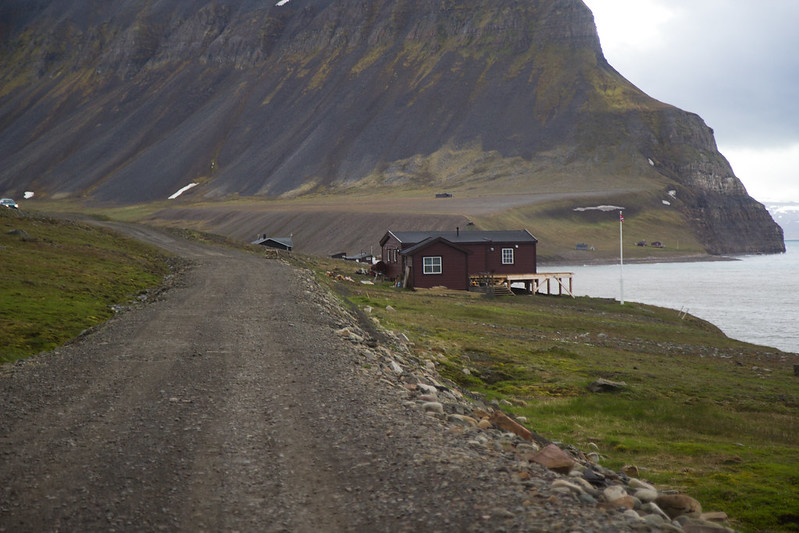 By this point, the road had grown a little too difficult for us to continue traversing, and so we reluctantly drove back to Longyearbyen, returned Lena’s car, together with a bottle of wine and some money for gas, picked up our bikes, and cycled back to our campsite. The next day was to be our last in Svalbard, and we were going to need a good, and hopefully unbroken, night’s sleep, for the kayaking adventure that we had planned. 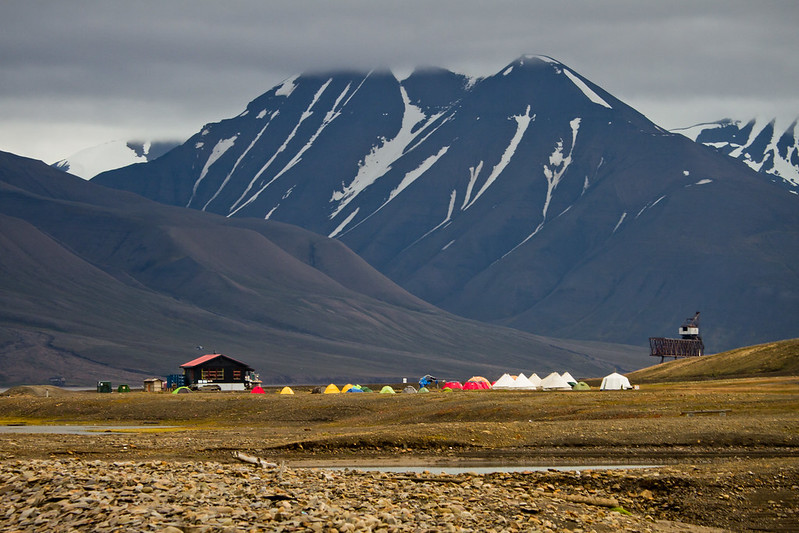